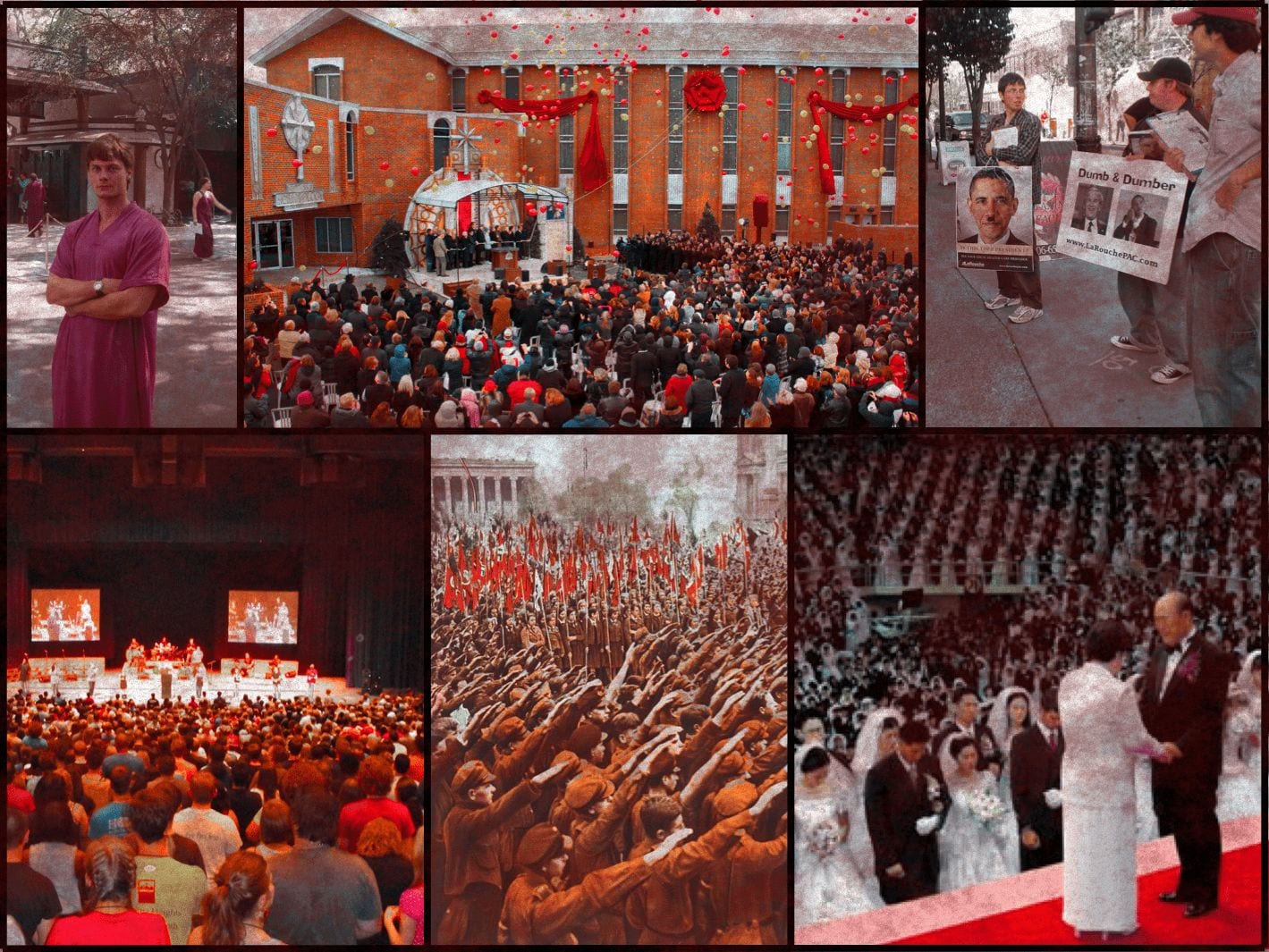 A few people have asked me recently what a typical cult member looks like. While every group and individual is unique, there are common patterns for how cult members think, feel, speak, and behave. Check out the BITE Model and the right side of the Influence Continuum graphic. 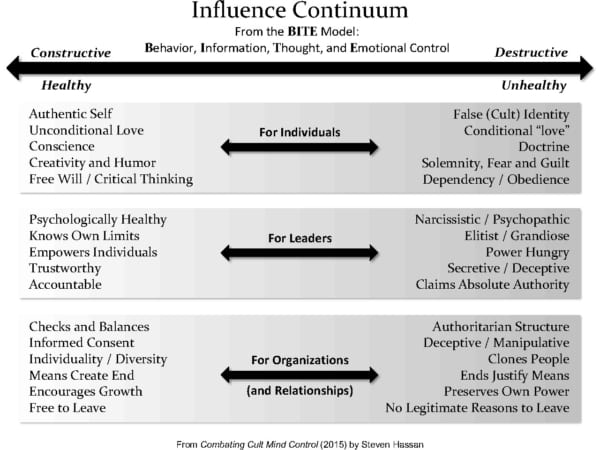 Cult mentality is usually absolutist, simplistic, rigid, and rooted in terms of black-and-white, Us vs. Them, good vs. evil. Rather than examining evidence and then forming beliefs based on that evidence, cult members start with the “answer” and pay much more attention to evidence or ideas that support that belief. They are reluctant to re-assess the ideology or listen to other viewpoints.

Because cults teach thought-stopping behaviors in order to suppress negative or disloyal thoughts, cult members may have difficulty concentrating when presented with a message which contradicts their group leader or doctrine. They may change the subject, deflect, use loaded language, or get angry and defensive. They may even start meditating, singing, chanting, or praying.

Cult members receives conditional “love” based on their level of conformity

If a typical cult member experiences failure, they don’t blame the doctrine or practices of the group. They blame their own “weakness” or “impurity” and are driven to work harder to conform.

Cult members often turn this judgmental attitude onto their own friends and family, preaching to them as if they need to be converted.

Cult members are often caught in a fantasy of an ideal past that never existed, or a vision of a Utopian future. Or, they may live their lives with a terrible sense of urgency and anxiety about an impending Armageddon event. They are not anchored in the here and now, or in reality.

Cult members are taught to suspend logic, avoid reality-testing, and believe in Truth with a capital T or “alternative facts.” One example from the Jehovah’s Witnesses is their version of the Bible which is not based on any translation recognized by Bible scholars or other people outside the group.

Cult members are manipulated through fear and guilt. They are made to feel there is a threat to their identity, safety, families, health, country, or spiritual well-being. They may blame problems on scapegoats such as ex-members, racial/ethnic groups, Satan, or foreigners. As Eric Hoffer wrote in his book The True Believer, “Usually, the strength of a mass movement is proportionate to the vividness and tangibility of its devil.”

Cults instill phobias in their members to keep them afraid of criticizing or leaving the group. Cult members may fear that if they deviate, something bad will happen to them such as sickness, death in the family, accident, insanity, or job loss. Sometimes, these threats are real and not just irrational phobias! Some cults retaliate against critics and ex-members.

Dependency on the Cult and Obedience to the Leader

Cult members are led to believe that their leader is the only one who can help them solve problems, achieve enlightenment, protect them from threats, or whatever else they have been promised. Their leader tells them, “Trust me, I know.” Cult members obey their leader, changing their speech, dress, diet, sleeping patterns, sexual behaviors, relationships, and habits to conform to group expectations.

There are ways to break these patterns and create your own authentic identity and beliefs. If you suspect that you have been unduly influenced, take a step back from the group for at least three days. Take a break from any group materials or activities. Get plenty of sleep. Eat healthy food. Study models of mind control. Talk to critics and ex-members. Try to examine your own experiences honestly. Don’t be a cult clone. Life is so much more fulfilling and beautiful when you’re able to be yourself and appreciate the diversity of the human experience.

Healing From Torture and Human Trafficking