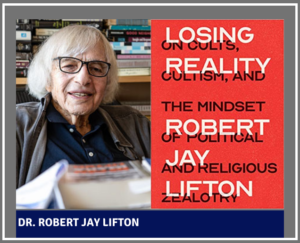 Forty-five years ago, I was deprogrammed from the Moonies. Over two years prior to that, I had been recruited into the cult, had undergone systematic mind control tactics and become a loyal follower of Rev. Sun Myung Moon. I had been fully convinced that Moon was the Messiah, sent by God to save the world. And I had participated in recruiting others into the cult, wholeheartedly supporting the mission of the Moonies. Being recruited into a cult is in many ways a catastrophic event.

For any ex-cult member, successfully regaining freedom of mind and returning to one’s authentic self is not just a one-time event. Rather, it is a long process of gaining understanding about mind control tactics and how these tactics are used to create a “cult self” that overshadows the real self. Being recruited into a cult is not evidence of weakness in an individual but rather testimony to the effectiveness of mind control tactics.

One of the earliest and most significant studies of mind control was done by Dr. Robert Jay Lifton in his groundbreaking 1961 work, Thought Reform and the Psychology of Totalism: A Study of “Brainwashing” in China. Dr. Lifton did an in-depth analysis of the experiences of fifteen Chinese citizens and twenty-five Westerners who underwent brainwashing by the Communist Chinese government. His book was one of the sources used in my deprogramming that helped me understand what had happened to me.

I was still undergoing intensive study about persuasion, undue influence and mind control. I was still an embarrassed, ashamed, 22-year-old college dropout, ex-cult member. But because Dr. Lifton’s work had been so instrumental in my recovery, I decided to contact him, and he graciously agreed to talk with me. After I had explained my experience in the Moonies, Dr. Lifton told me that I had actually lived the type of experience he had only studied second hand. He advised me to study psychology so that I could help explain the experience to people like him, as well as help other ex-cult members. It is not an exaggeration to say that Dr. Lifton and his book changed my life, giving me a way to reframe my experience and use it for positive good in the world.

Lifton identified eight criteria that are part of mind control. These criteria were essential elements of the Chinese brainwashing process and apply also to cults and even in individual controlling relationships. The criteria are:

It is beyond the scope of this particular post to delve deeply into each criterion, but understanding them is important. I recommend reading a previous post in which Dr. Lifton describes them in detail.

In the years since my first conversation with Dr. Lifton, I have had the pleasure of interviewing him numerous times on various subjects. (See links below for these interviews.) For our conversation this time, I asked Dr. Lifton to discuss some of his current thinking, particularly as it relates to the world-wide Covid pandemic, which has been and continues to be a catastrophic event. What might be the cause of the rampant efforts by right-wing politicians and others to deny its reality.

Ever since writing Death in Life: Survivors of Hiroshima, Dr. Lifton has been vitally interested in the way humans respond to significant traumatic events and what supports need to be provided so that traumatic events do not lead to further destruction but, instead, to renewal. Using the pandemic as an example, Dr. Lifton expounds on some critical elements.

Denial of the Pandemic. A surprisingly large number of people, including right-wing politicians and outspoken Trump supporters, have engaged in outright denial of the pandemic.  Even those who to some extent acknowledge there might be a public health problem, have not been able to conceptualize the extent to which the pandemic is creating catastrophic, world-wide problems. Dr. Lifton points out that without acknowledgement that an event is catastrophic, it is not possible to picture oneself as a survivor of that event.

Creating a Substitute Catastrophe. When people are in the position of partially accepting and partially denying a particular catastrophe, they are likely to create a “substitute” catastrophe to which they can give their complete allegiance. A core belief at the heart of Trump’s support is white supremacy. Numerous alternative catastrophes are popular throughout the right-wing political spectrum, such as Jews are trying to replace us, immigrants are flooding across the borders to take our jobs, etc. Cults also utilize this tactic by instilling phobias and black and white thinking into their world view.

Symbolic Immortality. This concept has its roots in the fact that humans know they will die. In order to live with this terrifying fact, humans rely on symbolic immortality—often expressed through religious beliefs, but also in knowing that children and grandchildren will carry on the human race. When certain catastrophes are apocalyptic (such as nuclear destruction or severe and irreversible climate change), the reassurance of symbolic immortality is greatly weakened and sometimes completely eliminated.

Doubling. In his study of Nazi doctors, Lifton recognized an ability to create a form of inner division, which he calls doubling. Many of these Nazi doctors would engage in horrific behaviors, including torture and murder. But then they would be able to go home and be a good husband and father. Doubling is a defense mechanism that enables a person to participate in evil but otherwise be a relatively ordinary person. I described the subjective experience of being two people–the real Steve Hassan (loved to read, play basketball, write poetry, loved women) and the right wing fascist cult leader, fashioned as a clone of Sun Myung Moon–Steve Hassan.

Proteus – Providing Hope for the Future

Lifton named this psychological phenomenon of Proteanism after the Greek god Proteus, who was able to change shape in response to crisis. Even in our time of extremely rapid change, with social media that provides instantaneous global communication, humans have the ability to show remarkable resilience and can create new psychological responses. Lifton is about to publish a new article on grounded Proteanism–the need to be anchored to values and community for meaning and survival.

While it is easy to become despondent and lose hope for the future, Dr. Lifton emphasizes that there are still elements of hope. Survivors of cult mind control are becoming increasingly vocal and developing mutual support networks. Understanding the dangers of undue influence and authoritarian approaches is increasing. The fight may be difficult, but it is the only way the world can survive. Dr. Lifton, age 95, continues to be a major champion in this fight. We owe him significant gratitude for his contributions to preserving the human right to be free of authoritarian influence and control.

Dr. Robert Jay Lifton on Trump, COVID-19, and Racism: The Struggle for Reality and Oppression – Freedom of Mind Resource Center