The BITE Model and Jehovah’s Witnesses 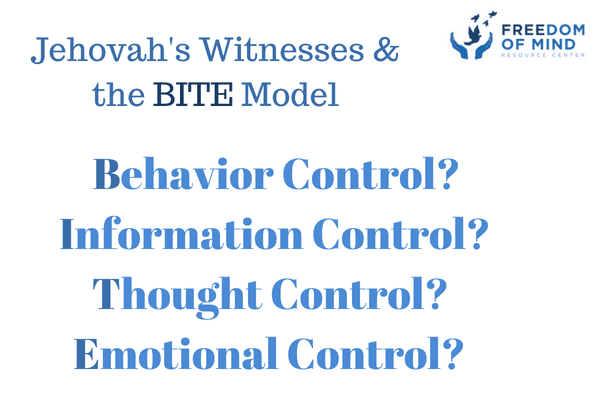 This past June, I did an online survey on influence to conduct, analyze and publish research on undue influence. Scientific data is required to help establish specific evaluation criteria to update legal and social policy in the United States and around the world. The initial results of my research show that former members of the Mormons and Jehovah’s Witnesses report many meaningful behavioral criteria. With over 700 respondents, there is significant preliminary evidence that both groups use specific methods and techniques that influence how a person thinks, feels, and acts to instill obedience over conscience.  I formulated the research questions from the four-component BITE Model. I developed this model over thirty years ago based on Festinger’s Cognitive Dissonance Theory, and Lifton’s and Singer’s models developed from studying brainwashing in the 1950s. “BITE” stands for Behavior, Information, Thought, and Emotional control.

Last month, psychologist John Dehlin, after reading my book Combating Cult Mind Control,  applied the BITE model to the Mormon Church. (You can see his assessment here.)  This month, I have asked Kimmy O’Donnell, a support staff member for Freedom of Mind and a former Jehovah’s Witness, to do the same for the Watchtower. I felt it was important to do a blog which applies the BITE model to the religious practices and doctrines of Jehovah’s Witnesses. Kimmy’s assessment follows below.

I have already written about a number of policies that concern me with the Watchtower Society. Some of these include their use of shunning, the loss of life over refusing blood transfusions and the common use of corporal punishment.

Below are a series of images that include the main points of the BITE model.  Using John Dehlin’s idea, Kimmy colored the bullet points in the following ways:

This is Kimmy’s assessment, and we welcome feedback. Does this analysis fit?  I am not sure members are not bored into trance states while attending long meetings or study sessions based on my information. But, please let me know what you think! (contact us)

Many people incorrectly think of mind control as an ambiguous, mystical process that cannot be defined in concrete terms.  In reality, mind control refers to a specific set of methods and techniques, such as phobia programming about Armageddon. Destructive mind control can be determined when the overall effect of these four components promotes dependency and obedience to some leader or cause; it is not necessary for every single item on the list to be present. In fact, there only need to be a few major behaviors under each of the four components.

As you see above, many of the listed items apply to Jehovah’s Witnesses.  The behavior of members is controlled by limiting contact with “worldly” or “bad association” which includes disfellowshipped friends and family. Going against this could result in the member also being disfellowshipped.  Additionally, men are encouraged against having beards and women must wear modest-length skirts (never pants) when engaged in all aspects of worship.  They are not allowed to consume blood in food products or receive whole blood components in a life-saving transfusion. As well, to be active and in good standing, they must attend weekly meetings of worship, engage in preaching about their beliefs with non-members and then report that time each month to their local congregation.

As for information, members are discouraged from engaging in critical thinking about their beliefs and are instructed not to speak with ex-members, especially those labeled as “apostates” and, if they do so, they can be sanctioned.  Self-policing and reporting on others to congregation elders is encouraged.

Jehovah’s Witnesses control the thoughts of members by using loaded language and refer to their belief system as the “Truth” whereby everyone else is controlled by Satan.  This results in members’ emotions being manipulated by fears and phobias.  The fear of dying at Armageddon or being shunned by friends and family keeps them dedicated to the organization, along with the guilt of displeasing Jehovah God, the elders, and the congregation.

The extreme variables listed above that do not apply to the Watchtower were included when I started working with sex trafficking survivors and members of violent groups including terrorist cults.

If you have never been a member of the Jehovah’s Witnesses but, rather, have been involved with another controlling group or relationship, I encourage you to review the BITE model components, along with the Influence Continuum and honestly evaluate whether your organization or relationship practices some of most of these behaviors.