The Colonization of Indigenous Peoples and Mind Control 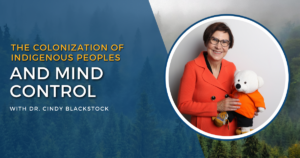 In the past two years, I have been doing intensive research to understand authoritarian mind control as it relates to Indigenous peoples. Profound thanks to Desiree Kane, and especially Dr. Cindy Blackstock, Executive Director of The First Nations Child & Family Caring Society. I have read books, watched documentaries, and essentially been deprogramming myself from the cultural programming of American society. Colonization has been perpetrated on Indigenous cultures all over the world, essentially by countries wishing to impose Christian ideology and steal the land and resources of native peoples. I had the distinct pleasure of participating in two essential webinars sponsored by the First Nations Child and Family Caring Society of Canada.

Additionally, they have produced three information sheets on the topic that attempt to convey how the Canadian government used authoritarian mind control to dehumanize Indigenous peoples and convince the public that the government was acting in the best interests of First Nations, Metis, and Inuit peoples. The hope is to help everyone understand what was done and how to hold perpetrators responsible and help address recovery from indoctrination. Reparations have been promised and, in Canada, awarded by the Court. But followthrough has not been forthcoming at an acceptable level.

The Influence Continuum and BITE Model of Authoritarian Control applied to colonization help to identify how cults indoctrinate and control others. BITE stands for Behavior control, Information control, Thought control, and Emotional control: these are the tactics that cult leaders use to manipulate people’s minds.

This indoctrination and control not only show how Indigenous peoples were and are treated, but it also influences how non-Indigenous people view them, which has widespread impacts in many areas, including allowing human rights abuses to go unchecked and to be excused. An example is in the wide media coverage of issues such as polluted water supply when those suffering are non-Indigenous, while the chronic underfunding of public services such as health care, child welfare, and infrastructure on reserves in Canada is excused and rationalized.

Colonization and Its Life and Death Impact Today

We see this discrepancy in homicide and disappearance cases as well, so much so that it has its moniker: Missing White Woman Syndrome (MWWS), which describes the phenomenon of missing white women receiving a plethora of media coverage vs. missing women of color or Indigenous women. Wyoming’s Task Force on Missing and Murdered Indigenous Persons data showed white women are much more likely to have media articles written while they are missing. At the same time, the media often only reports on a missing Indigenous person after their body is discovered.

The impact of colonialism continues in this area, with the Task Force reporting that media portrayal of homicide victims who are Indigenous emphasized negative character framing as opposed to those who are white. With people’s lives at stake, we see the devastating impact of colonialism and its subjugation, which we continue promoting today.

Unfortunately, the life and death issues of colonialism are nothing new, as Indigenous peoples in Canada were forced to attend state-funded Christian boarding schools. Mass grave sites at these schools revealed thousands of children who died from disease and abuse. The government was aware of these graves. Had the government acted on reports of wrongdoing throughout the decades, many of these deaths would have been prevented.

The “civilization” of Indigenous peoples was also promoted by Federal Law in the United States between 1819 and 1978. The prevailing idea was that Indigenous peoples needed to assimilate into the white man’s culture, which included destroying everything sacred to them, from physical characteristics (cutting hair short) to eliminating native languages and spiritual and ceremonial practices.

This forced assimilation exerted undue influence on Indigenous peoples resulting in a desecration of their culture and continued impacts on government policy, such as Canada’s Indian Act, which was designed to control the lives of First Nations people and still exists today.

The colonization of Indigenous peoples has a widespread impact on mental health treatment today, particularly in substance abuse. In the book by Eduardo Duran with contributor Bonnie Duran, the authors point out that medicalizing alcoholism and its abuse rather than viewing them as social problems creates a standard against which everyone is measured. According to Duran and Duran, this is problematic because the standard is of a middle-class dominant white culture.

Duran and Duran also posit that not viewing alcohol abuse in a historical context allows for the issues of domination and subjugation to be set aside, which means alcohol use is not being studied as a possible functional behavior adaption “within a hostile and hopeless social context.”

The cult mind control tactics used to subjugate Indigenous peoples centuries ago continue to influence all of us today in ways that are negative and life-threatening in some cases. Understanding both the historical context of how cult mind control worked in colonization and how it continues to influence us today negatively is the foundation of producing positive change. We are all obligated to understand our history and work with Indigenous peoples to move forward, be honest and open about their struggles and contributions, listen intently to their needs, and work toward the change they so clearly deserve.