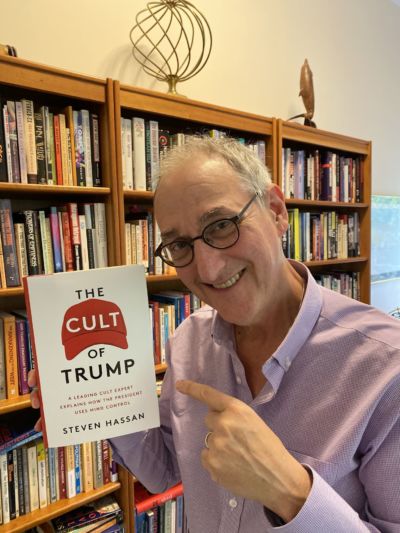 My fourth book, The Cult of Trump, is finally out and on bookstore shelves everywhere. I have been receiving selfies from friends all over. If you are at a bookstore with the book, snap a selfie and share it! For those who prefer to listen to books, please be aware that I was able to read the audiobook. People who have been listening to the book say I did a really good job. After all this effort, it is truly gratifying to hear from people how important they think the book truly is. Many have told me that they never understood with so much clarity how much cult leader personality as well as cult psychology was at work in the Administration. They told me the book has really offered them a handle on not only understanding what is happening politically but they also learned specific strategies for how to make things better. The book has the potential to not only to help heal our country but also other nations around the world.

This week, I have had a number of articles come out and more interviews will be coming. I am hoping that ex-cult members, their families, and friends will begin to talk and share stories of how destructive cults and their leaders operate. My sincerest hope is to minimize the stigma that still exists in people’s minds that anyone who gets involved is stupid, weak, not educated, not religiously educated or from a bad home. Blaming the victim is wrong and shining the light on malignant narcissists who are pathological liars who use systematic psychological and social influence tactics is the issue. Please download the pdf of the press release for the book and send it to bloggers, web sites, and news media that you think should know about the book. Write a review on Amazon and send it to us too, please. Those who know how to use social media, please help spread the word.

In the coming days,  I hope to be called on to contribute to important news as it breaks on television. One obvious topic that I am well-equipped to discuss is the issue of brainwashing and mind control. It is so interesting that the Chinese government has re-instituted their thought reform, re-education programs which reportedly affect more than one million people. May I remind my readers that it was the studies (Lifton, Singer, Schein, and West) of Chinese brainwashing which helped me be deprogrammed from the Moon cult. The Chinese have been using technology including putting their internet behind a government firewall, banning anything they do not like, spying on its citizens, using facial recognition, as well as, AI to create a frightening version of the 21st-century version of Orwell’s Big Brother. That said, the Chinese government accused Hong Kong’s schools of brainwashing students to think for themselves which has resulted in massive protests for many weeks.

The Right accuses the Left of brainwashing. I have been accused of being brainwashed by George Soros and the liberal media. Can you believe this? Yet, these folks do not understand the facts. Despite the book’s title, my book talks mostly about not only the overall structure, Influence Continuum, and the BITE model but how media is implementing influence on a massive scale–resulting in this horrible polarization.

I have advocated for communicating with respect and asking questions with a non-judgmental, curious approach. In this time of extreme polarization, the only way to end this terrible cycle of extremes is to build bridges with compassion. I suggest that people reach out to family and friends who they have cut off from and to begin to heal the rifts in an intentional, rapport and trust-building way. We all share more in common and our futures are interdependent. The overwhelming majority do not want an armed civil war, and we do not approve of messaging which incites violence by anyone on anyone. Blood is thicker than water and family members are special people.

Another core issue I raise in my book is that of Dominionists (Catholic and Protestant) who wish to tear down the separation of Church and State and impose their own religious agenda on our country. This was highlighted by Secretary of State and former CIA director Mike Pompeo’s talk that sits on the front page of the State Department’s website. This has prompted outrage by citizens who do not wish our country to be promoting a singular religious agenda–especially one that is not representative of mainstream Judeo-Christian-Islamic values of honesty, charity, love, and compassion. These three main Abrahamic religions all are founded by a man who kept his tent open for all strangers to find food, water and welcome. This country has Native American spiritual traditions, humanists, atheists, Buddhists, Sikhs, Sufis, Wiccans, and other religious groups. We used to think of America as a melting pot and we were much stronger because we embraced people from all over the world. Chapters Seven and Eight are incredibly important chapters in understanding the forces manipulating the President as well as his core followers. Chapter Nine is my advice on how to help empower people to stop operating out of fear and propaganda but to start thinking for themselves again. Like with all my clients, I explain that they got involved because they were lied to and manipulated incrementally to surrender to the great leader who said, “Trust me!” We all make decisions with the information, knowledge, and experiences we had at the time. Now we know more.

I look forward to hearing from those who read the book. Please check in on our Cult of Trump media page and we will endeavor to add links to stories and interviews as they come out. I hope we can change the fundamental conversation about what is going on in our country and the world. We live in the Age of Influence, and our only hope is informed citizens who are civically engaged, making wise decisions for our long-term future.