The Solipsistic Reality of President Trump: A Discussion with Dr. Robert Jay Lifton 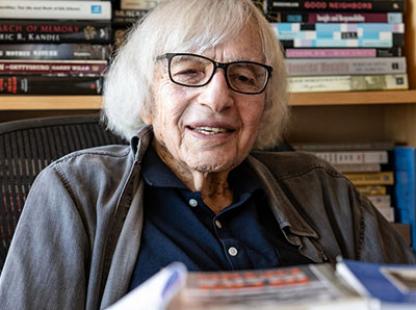 This past February of 2019, I interviewed Dr. Robert Jay Lifton about his thoughts about the current political situation in America. It is always a privilege. I have been fortunate enough to interview him a few times before. (Listed at end). Recently, he gave me permission to republish his Eight Criteria of Thought Reform. In his seminal work, he concisely explains mind control, brainwashing, and thought reform. I also posted a blog about Dr. Paul Martin’s expert report on Raniere’s NXIVM in which he used Dr. Lifton’s criteria. He is a psychiatrist, an author, an expert, and an activist, to name just a few.

Dr. Lifton has written many books (see list at the end) and has a new book scheduled to come out October 2019, entitled: Losing Reality: On Cults, Cultism, and the Mindset of Political and Religious Zealotry.

His 1961 book, Thought Reform and the Psychology of Totalism: A Study of “Brainwashing” in China was instrumental in my deprogramming from the Moon cult in 1976. When we first met in 1976, he validated me and heartily encouraged me to study psychology. Lifton wrote the forward to The Dangerous Case of Donald Trump edited by Dr. Bandy X. Lee. In February, when we taped this interview, President Trump was about to declare a national emergency to push through his agenda of building a wall.  Dr. Lifton’s insights about President Trump are truly enlightening. (See Video Interview.)

The Reality of President Trump

Dr. Lifton begins by discussing the solipsistic reality that exists with Donald Trump, that is extremely egocentric. “This man has as his only reality that which is perceived and required by the self; that means anything can be made up and is totally unresponsive to ordinary claims of reality or evidence.” Trump focuses on what he perceives to be the only crisis in existence, that of immigration. “I believe that over the course of his two-year presidency, he’s getting more and more trapped by his own solipsism. Now, he tries to disseminate it, insists that it be applied to society. He is president, after all. … and it’s accompanied by a nasty attack mode with a strongly paranoid quality.” Additionally, he’s gotten more and more grandiose and as lied more frequently.

Taking all of this into consideration, Dr. Lifton and I explore the possible endgame of his office, perhaps he is impeached, deposed or spirals out of control and steps down. However, until that happens, he is dangerous and is becoming more dangerous the longer he is in office, especially with his narcissistic and egocentric traits. One can only imagine Trump’s upset that special counsel Robert Mueller has agreed to respond to the congressional subpoena to testify publicly.

Dr. Lifton shares that there are cultic dimensions in play with Trump and the Trump movement. While it is not a typical, formal cult, there is evidence that some of his followers view him as an almost all-powerful, omnipotent guru-like figure. But as his supporters and loyal followers wake to the reality of what he is doing and saying, his decline will see his support diminish; when his supporters turn against him, this would be the end to his hope for reelection. Also, there are similarities between Trump and Shoko Asahara, the leader of the Aum Shinrikyo (Japanese sarin gas cult), which we discuss in our exchange.

Further, we go on to talk about Trump’s need to feel powerful and how long he can continue on if his power is threatened by a change of support. Dr. Lifton discusses how Chinese communist thought reform, a group of political extremism, relates to the Trump movement. While seemingly separate, political and religious cults can have similar psychological patterns. Dr. Lifton goes on to discuss his work on cultism relating to Nazism, climate change, and nuclear bombs, along with the apocalyptic crisis they create.

Additionally, in America, some citizens have a suspicion of authority and even of science. Trump has shown extraordinary skill for manipulating those aspects of the American psyche which operate in conspiracy theories.  And while these anti-authority, anti-expert, anti-science issues existed before Trump, he has a penchant for presenting these, naturally, and captivating his supporters with these unfounded claims. And he loves to manipulate the media to direct people’s attention away from things which upset him and he desire for reelection. As mentioned, he is creating his own reality.

In the discussion, we go on to talk about cults and the parallels between Trump, including how he is a pathological liar and demonstrates narcissistic qualities. But while Trump does not implement a systematic, thought reform process, the result is the same. Also, we mention Trump’s dealings with Putin and Kim.

There is much we can learn from Dr. Lifton’s decades of expertise and, considering what is at stake, we all must do our part to speak up and point out the true reality of Trump.

Other Blogs About Donald Trump

Does Trump Display the Stereotypical Profile of a Cult Leader? -10/14/2016

Traumatic Narcissism: From Muktananda and Gurumayi to Donald Trump 12/27/2018

Dr. Bandy Lee and Dr. James Gilligan: Do We Surrender Our Moral Compass to Technical Rule? 3/07/2019