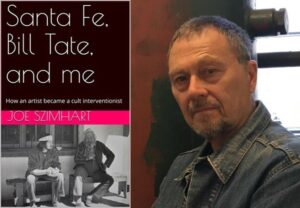 Our last blog post focused on the possible connections between Ginni Thomas’s experience in the Lifespring cult, her religious fundamentalism and her texts to Trump’s former White House Chief of Staff Mark Meadows supporting the QAnon conspiracy theories regarding the 2020 election being stolen. I had released a video of Ginni Lamp (Thomas) at a 1986 former member’s meeting. I led this support meeting in which she talked about her experience in Lifespring and her wishing to figure out her beliefs and how to find a balance between cult awareness activism and her personal life. A tweet thread with a short video excerpt went viral with over 6 million impressions. On April 6th, 2022, I appeared on MSNBC’s Ari Melber’s show, The Beat, to discuss this.

I reached out to my colleague and friend, Joe Szimhart, who was involved in that 1986 support group meeting that was featured in the video. I wanted to delve more deeply into understanding some of the conservative, right-wing religious groups and their attempts to weaken US democratic freedoms and protections. So, I invited Szimhart to talk with me about his experience in the Church Universal and Triumphant (CUT) and share his vast knowledge of theosophy and traditionalist Catholic organizations.

Szimhart was born in a Displaced Persons camp in Germany just after the end of World War II. His family was refugees from Hungary, and he describes his family as being pinched between the Axis powers during the war and then overtaken by the totalitarian Communist powers. The family emigrated to the United States when Joseph was three years old.

Raised as a Catholic, Joseph served as an altar boy. During his childhood the Mass was in Latin. While he was in college Szimhart began to move away from Catholicism and developed an interest in theosophy and more esoteric parts of metaphysics and religion. He delved into the teachings of Madame Helena Petrovna Blavatsky, who was one of the first to introduce Eastern spiritual concepts to the West, and whose work spearheaded the development of the New Age movement.

In Santa Fe, New Mexico, Szimhart came into contact with people in the I AM movement and the Church Universal and Triumphant, founded by Mark and Elizabeth Prophet. He became so deeply involved that he was willing to leave his wife and daughter to join the staff of CUT. Eventually, after his divorce, Joseph began to experience doubts about the group, leading to severe panic attacks. We agree that these panic attacks were likely due to phobia indoctrination from his experience in CUT. Cults instill such fear of leaving the group that it becomes almost impossible. CUT taught that any signs of doubt are Satanic and if you left the group your changes for ascension would be rescinded for about 10,000 lifetimes. Phobia programming subverts rational thought.

Once he began to have doubts about CUT, Szimhart read a great deal about cult programming, including the works of Margaret Singer and Robert J. Lifton. A book by Flo Conway and Jim Siegelman titled Snapping: America’s Epidemic of Sudden Personality Change proved to be most helpful. As with all cult members who are struggling to break free from the cult’s influence, talking with ex-members is of vital importance. Numerous groups exist specific to any number of cults, and they provide valuable support and resources for people exiting cults.

Theosophy and Political and Religious Fundamentalism

Szimhart has done a deep dive into theosophy as well as into religious fundamentalism. I asked how the world view of theosophy might have influenced the right-wing religious and political thinking that is driving current events.

Two of the most influential traditionalists were René Guénon and Mircea Eliade. Guénon was a Frenchman, raised in the Catholic tradition, who explored Freemasonry, Sufism, and theosophy. Guénon considered theosophy to be a pseudo-religion, rather than a true religious tradition and wrote a very good critique, which Szimhart was able to read in the original French. Mircea Eliade was a Romanian religious historian and author who eventually became a Professor of Religious Studies at the University of Chicago.

Rene Guenon maintained that there is a kind of cosmic, perennial wisdom that certain people can tap into. To be initiated into that wisdom, however, it is necessary to belong to some religious tradition. That tradition could be Hindu, Judaism, Catholicism, Fundamentalism or Sufism. Guenon also said that we were currently in an increasingly materialistic society, and he was a vocal critic of modernism. Individuals who are initiated into this cosmic wisdom do not necessarily espouse their views openly; rather they continue to identify themselves as members of a “normal” religious group while working to further the advancement of fundamentalist ideas.

Steve Bannon and Aleksandr Dugin were both influenced by the writings of Rene Guenon. Dugin is a close associate of Putin, whose authoritarian, ultra-nationalist ideals led to many military involvements in spots around the world including the recent invasion of Ukraine.

The Second Vatican Council, initiated by Pope John XXIII in October 1962, created dramatic changes in the Catholic Church. These changes represented a break with traditional Catholic rituals and laws. The significant backlash from more traditional Catholics was swift, including from French priest, Marcel Lefebvre, who was subsequently excommunicated in 1988.

Ultra-conservative Catholic organizations existed before Vatican II, however. Perhaps most significant is Opus Dei, founded in Spain in 1928 and designated as a Papal prelature. When I was doing research for my latest book, The Cult of Trump, I learned that William Barr, who served as Attorney General under George Bush and Donald Trump, was a board member of Opus Dei in Washington D.C.. Robert Hanssen, former top FBI counterterrorism official, was convicted spy, coopted by Russia.  He was a devout member of Opus Dei. Interestingly, William Barr was Attorney General during his arrest and trial and stated that Opus Dei had nothing to do with Hanssen’s activities. Something I find hard to believe.

Ultra-conservative, right-wing Christian religious organizations of have been taught to believe that the United States was founded to be a “Christian” nation and that Christianity should be America’s official religion. To have this occur, the rights and liberties that were enshrined by our Founding Fathers in the Constitution and Bill of Rights can be severely limited, and even eliminated. The ongoing efforts of such groups pose a very real threat to our democratic way of life and must be taken seriously.

Disengaging from the Church Universal and Triumphant Some Strategies for Dialogue with Disenchanted Members | Institute For Religious Research (irr.org)