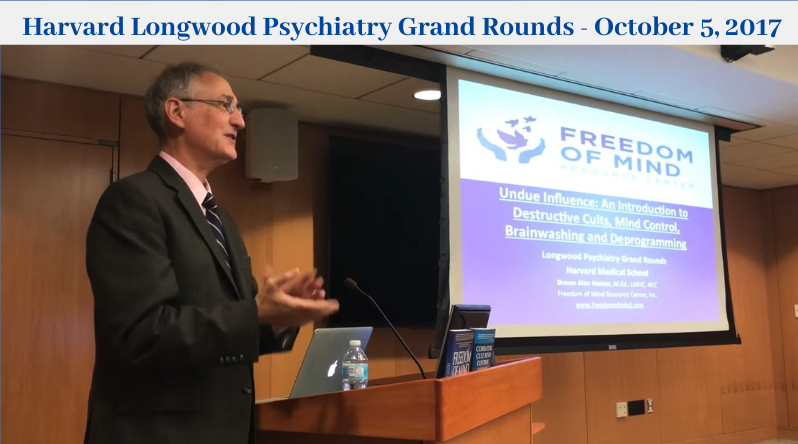 Many Americans breathed a sigh of relief when Joe Biden became the 46th President on January 20, 2021. QAnon and other true believers were upset that nothing happened to change that on March 4. Over 400 people have been arrested so far and charged for their role in the failed January 6th insurrection attempt. Yet, polls indicate there are tens of millions of Americans who still believe the big lie that the election was stolen. These people also disbelieve that Russia has been deeply involved with Trump for decades and influential during his Presidency. COVID-19 remains a major health problem; however, millions of Americans are refusing to wear masks, observe social distancing or get a vaccination. Enemies of democracy wish to continue the polarization of issues and promote suspicion of science and the office of the Presidency.

The social isolation, fear, anxiety and economic pressures that Americans have endured have had a huge psychological toll. Many thousands of American families have suffered severe internal disruptions resulting from manipulative recruitment by groups such as QAnon, Proud Boys, and Anti-vaxxers. Numerous conspiracy theories regarding the COVID-19 pandemic in general and the vaccinations in particular have gone viral on social media. Perhaps the most outlandish theory is that Bill Gates manufactured the pandemic in a plot to inject Americans with a mind-control microchip disguised as a vaccine!

Unfortunately, most mental health professionals have not been trained to do proper intake histories with new clients regarding their possible involvement in authoritarian groups and conspiracy theories. Nor are they trained to help family and friends learn how to strategically and constructively engage with those who have been unduly influenced. Whenever I conduct a training, I like to cite the following, which is listed in the Diagnostic and Statistical Manual of the American Psychiatric Association:

“Identity disturbance due to prolonged and intense coercive persuasion: Individuals who have been subjected to intense coercive persuasion (e.g., brainwashing, thought reform, indoctrination while captive, torture, long-term political imprisonment, recruitment by sects/cults or by terror organizations) may present with prolonged changes in, or conscious questioning of, their identity.”

Despite the fact that brainwashing (thought reform) by cults has been included since the DSM3R (1987), the vast majority of mental health experts are not aware of it. Few have had any formal training in how to help clients. Cult indoctrination has been described by former members and experts who have experience with brainwashing as creating a new identity–the “cult self.” This new identity does not replace the “authentic self,” but exerts “executive control.” There is a myriad of behaviors done in the programming of the cult self that are best understood as control of: Behavior, Information, Thought and Emotions (BITE) to create the pseudo identity which is dependent and obedient. Some of these include lying (lack of informed consent) propaganda indoctrination, teaching thought-stopping and instilling phobias, just to name a few powerful behaviors.

Mental health professionals are on the frontlines in efforts to heal the damage that has been done. Greater understanding of how to identify destructive, authoritarian cults and the psychological and social effects that follow cult indoctrination is badly needed. However, most therapists need to know that it will be quite rare for a new client to self-identify as having been in a destructive cult. Most will present with one or combinations of these issues:

Victims of brainwashing need to feel respected, validated as worthwhile, and not blamed for getting ensnared. Unfortunately, most everyone suffers from the “fundamental attribution bias” which directs attention to the victim rather than to the social context and influence factors. We all want to believe we are too aware and self-possessed to fall victim to deceptive recruitment techniques. “How could an intelligent person be seduced into a cult?” “There must be something wrong with him or her.”

Any person can be susceptible to deceptive recruitment–especially during periods of situational vulnerability, such as the death of a significant person or the breakup of a romantic relationship. The pandemic, with over a year of social isolation, and resulting economic problems, has made everyone vulnerable to online recruitment and indoctrination. People who are on the autistic spectrum may be more vulnerable to the rules and intense feelings of community. People with vivid imaginations and people who are highly hypnotizable are also particularly vulnerable. The single biggest vulnerability is a lack of preventive education about cult mind control techniques. Age-appropriate information about undue influence and ways to protect oneself from it should be provided to everyone, beginning in middle school.

Unfortunately, modern social media platforms and AI internet algorithms can be used to radicalize. Detailed personal data is collected and sold to third parties in order to not only sell us products and services but to suck us down into deep rabbit holes of cult conspiracy theories.  This pervasive threat to individual mental health and overall social stability requires a more complex understanding of cult mind control and its negative effects, not only among mental health professionals but also in government and the law. 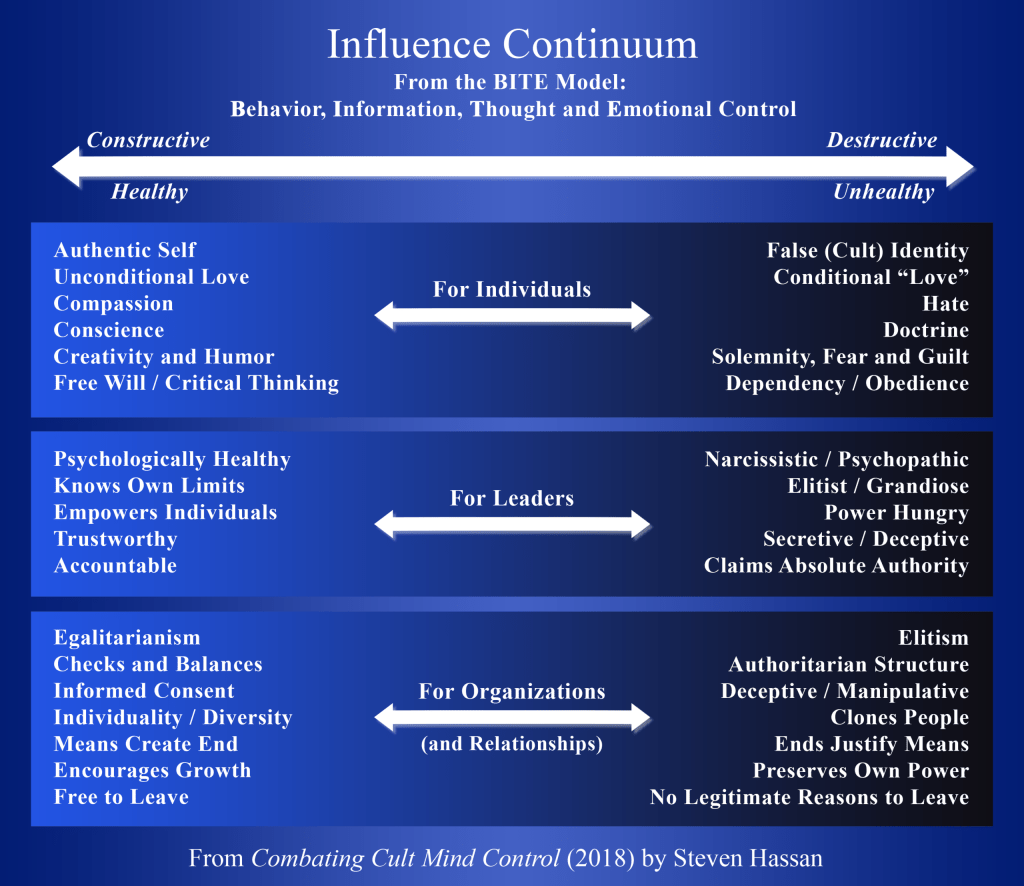 All organizations, whether secular or religious, use varying degrees of influence and may operate in ways that many people might consider authoritarian and dogmatic. Please study the graphic and review the BITE Model (Behavior, Information, Thought, and Emotion). With these two tools, one can identify control tactics used and assess where a particular relationship or group falls on the Influence Continuum –from healthy to unhealthy. A reasonable assessment can then be made as to whether a particular group is an authoritarian cult and to what degree they should be considered dangerous or unethical. The Influence Continuum assessment is also useful in determining to what degree an individual relationship can be considered healthy or unhealthy.

Do some basic research on cults, their different forms, and main recruitment tactics. Stories from ex-members are particularly helpful in understanding how people are recruited into authoritarian cults and the specific mental health challenges they face after leaving. The internet is very useful—with caution. Most sophisticated users of the internet may already search with caution, but these are particularly important and are worth repeating:

Working with Cult Members and Their Families

Mental health professionals may be contacted by the family of a current cult member asking for help in getting their loved one away from the cult’s influence. In the 1970s, forcible deprogramming, some with court granted ex parte conservatorships were the only option. However, the halls of justice stopped granting relief to concerned family members once the person was of the age of majority and also could pass a superficial evaluation that determined the person was not a danger to themselves or others. As an ethical and compassionate (and ultimately more effective) alternative, I developed the Strategic Interactive Approach. The goal is to empower the individual to think for him or herself and make independent decisions. It is not to persuade the person to leave a group or be controlled by the family. Freedom of Mind: Helping Loved Ones Leave Controlling People, Cults and Beliefs details my method of forming a trustworthy team of concerned people and organizing them to do an ethical influence campaign. Developing rapport and trust, coordinating respectful interactions and asking thoughtful questions works to empower a person’s authentic self.

If a client happens to be in the process of being recruited but is not fully committed, or if they are in a cult, but experiencing doubt about continuing, some very practical steps can be taken.