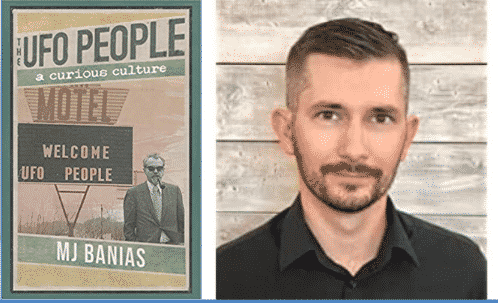 In our last blog, we talked with conspiracy theory debunker Mick West about his book Escaping the Rabbit Hole.  This week, it is my pleasure to blog and share my interview with MJ Banias about his expertise concerning UFOs as well as newer research he has been doing. Clearly, the COVID-19 pandemic has influenced people all over the world-creating social and economic upheavals as big or bigger than the Great Depression. Scientists and public health experts have given stern warnings against prematurely lifting social distancing restrictions without testing and contact tracing resources in place. All recommend mandatory use of facemasks for citizens when in public. Trump has announced that he has decided to end funding for the World Health Organization (WHO). It is not clear if he alone has the authority to do this.

Virus experts tell us categorically (and it does make sense) that COVID-19 must be dealt with cooperatively which means ALL nations of the world, including China. Individual countries will not be able to combat it effectively if they do not share scientific data and work together to find a treatment and a vaccination. Nor can a country seek to find a treatment or cure and keep it from people suffering the world over. Or can they? As some U.S. governors begin loosening restrictions, riots and looting are breaking out across the country due to the death of George Floyd, who was suffocated by the knee of a now-fired and charged-with-3rd-degree-murder Minneapolis policeman. Protests have taken place in many cities. Unfortunately, violence and looting have occurred, prompting Minnesota’s governor to call out the State Police and the National Guard to restore order.

It seems clear that there are State actors (and others) who wish to incite violence and conflict, online and in the streets. Disinformation, propaganda, conspiracy theories, hoaxes, and scam cures are being pushed on the public to confuse, disorient, induce fear, and further escalate conflict between Americans along racial and class lines. Everyone is very frustrated at all of the injustice. They are also fed up with the incompetency, incitement to violence, and pathological lying by Donald Trump and his minions.

I have written a number of blogs regarding the COVID-19 pandemic and touched on a few of these subjects, including how doomsday cult leaders are using fear to control and manipulate. Also,  how the religious right has been a threat to our government and world health. The Plandemic 20-minute video went viral regarding Dr. Judy Mikovits which has been debunked thoroughly.

This week, I continue my discussion about conspiracy theories but this time with MJ Banias–an author and freelance journalist who specializes in paranormal culture and the strange. In particular, he writes about the “disclosure community” which is a “conspiracy-driven new age segment of the UFO subculture that believes the government is hiding the truth about extraterrestrials.”

MJ recently interviewed me for an article he wrote for VICE, “UFO Conspiracy Theorists Offer ‘Ascension’ From Our Hell World for $333. David Wilcock and Corey Goode are peddling salvation, protection from the “Illuminati deep state,” and bogus COVID-19 explanations to millions on YouTube.”

The article goes on to talk about David Wilcock, a popular UFO conspiracy theorist who claims the “Illuminati Deep State” was responsible for the COVID-19 pandemic and that he has insider knowledge on how to save humanity. Corey Goode has also posted videos claiming insider information about the virus and how it was engineered as a “biological weapon from an American University” and then smuggled into China.

And they are both making money off of these claims made on YouTube. Wilcock and Goode have a large social media following and are looked at by the UFO subculture as spiritual leaders, even though they make the claim they are not.

I pointed out in his article how the Internet mentally isolates people and they are more susceptible to indoctrination. Leaders that claim to be Prophets can cause great harm, especially when believers wish to prove their dedication.

This is why it is important to have debunkers and skeptics that are willing to speak out and educate about these types of dangers.

Also mentioned in the article is Falun Gong (also known as Falun Dafa, and entities Epoch Times and Shen Yun) which spends countless millions of dollars spreading disinformation- mostly aimed against China. J.J. McCullough, a YouTuber from Vancouver, released a video about inside the Falun Gong propaganda empire, “This Chinese Cult is Not Your Friend“. I highly recommend watching it through. Not surprisingly, the group likes to threaten and attack anyone who speaks critically of them.

During our discussion, MJ first discusses how he got involved in the UFO paranormal conspiracy world, debunking UFO sightings. What he found was how interwoven a lot of these conspiracy-driven communities are. One UFO cult we both have investigated and written about is Heaven’s Gate. (See my blog The Heaven’s Gate Tragedy–The 20th Anniversary of an American Doomsday Cult Disaster.) For some of these UFO cults, they look at paranormal events from a religious view, believing a divine savior is behind it, and they begin to worship the leader. Some groups look to aliens as benign and positive forces. For others, they fear that aliens want to take over or destroy us.

For me, I think it makes sense that earth is not the only place in the countless universes with life. But I have yet to accept either point of view: that aliens wish to help earthlings or that there are aliens who look like reptiles, or like us, and are controlling the world. I am dubious that if alien beings even exist, they would even care about humanity and our tiny planet. Am I open to evidence to be convinced otherwise? Absolutely. But I have learned to take the position that the burden to prove something is on the folks with the outrageous beliefs or assertions, and not on me to disprove it.

I learned this the hard way–after being reprogrammed from the Moon cult in 1976. Was Sun Myung Moon the Messiah? Was he the greatest man who ever lived? Sinless? Able to make the world a Garden of Eden? Able to have sinless children? Once I accepted these outrageous assertations in “faith”. Now I am a skeptic. There is overwhelming evidence Moon was a liar, a malignant narcissist who had at least one child out of wedlock, had operational ties with the South Korean CIA, had a son who loved cocaine, prostitutes, and beat his pregnant wife. Not to mention was a convicted felon. ‘Nuff said.

Possibly at times, the U.S. government officials have used disinformation surrounding these reports of UFO sightings. Perhaps they wanted to hide from the public highly classified military experiments. It is important to look at everything critically and apply reason and logic. This is especially true if one is attempting to help loved ones caught up in conspiracy theories involving aliens. Learning about how the mind works and how biases work is very central to helping someone.

After a deeper discussion of UFO culture and conspiracies, MJ goes on to discuss Wilcock and Goode and how they are like cult leaders of the UFO community. They are bringing people from the UFO fold into the QAnon fold. Do they actually believe their outrageous beliefs or are they getting a lot of money to do what they do? They are so successful at their content creation, they make a handsome living off videos, books, and programs. Other conspiracies bleed over, including Trump’s conspiracy narratives and QAnon. Putin has his Russian intelligence agencies using psychological warfare and cyber warfare for at least as long as the U.S. has been using them. Democratic countries with free speech and openness to authoritarian cults and crazy religions are at a distinct disadvantage. The U.S. can’t operate in Russia or China or North Korea or other dictatorship like they can operate here in the United States.

In the conspiracy communities, started from within the UFO and paranormal communities, the second there is any criticism or anyone pokes holes in the narrative or asks questions or for proof, they simply say that they are being overly critical or they are not a “one of us” and are a part of the conspiracy. And in some instances, they may be confronted and attacked for speaking out.

The dangers of groups and leaders mentioned in our discussion is how quickly disinformation spreads on the Internet and social media. In one click, information can be shared with millions. These conspiracy theories, hoaxes, spins on truth, and misinformation can manipulate and control believers, who in turn engage in behavior that can be harmful to themselves and the community.

The more exposure, education, and dunking against these beliefs, groups, and conspiracy theories, the safer, we as a whole and as a person, will be. We must be open to evidence and reality-test claims. Remain pragmatic and critically objective.

Please take the time to watch my interview with MJ Banias, below–there is much more discussed than time will allow in this blog.

MJ Banias is a Canadian author and journalist whose work regularly appears in Popular Mechanics and VICE. He is the author of “The UFO People: A Curious Culture,” and he has been interviewed by the BBC, Cheddar, Coast to Coast AM, ABC, The CW, and many other respected podcasts and radio programs. He appeared on The CW’s “Mysteries Decoded.” His work has also been featured in Fortean Times, Mysterious Universe, FATE Magazine, and in a book entitled UFOs: Reframing the Debate.