What Is Wrong with Asking “How to Deprogram People from a Fervent Belief in Trump?” 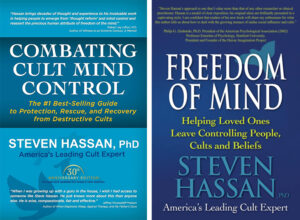 I have been doing interviews for The Cult of Trump book and, increasingly, the question of deprogramming is used, especially in the header. What I would like my readers to understand is that this comes from the editor or producer and not at my request. I have never liked the term “deprogramming”, even though I was successfully deprogrammed from the Moonies in 1976 and spent a year of helping people exit the Moonies using a forcible method. When judges would no longer grant an ex-parte conservatorship to parents of cult members, it became clear that it was illegal to do forcible interventions on adults. I chose to keep helping but without force. In 1988, I wrote Combating Cult Mind Control and discussed my experiences and why I was referring to what my colleagues and I were doing as exit-counseling.

While people can be programmed or indoctrinated through repetition and use of the BITE model set of techniques and behaviors, it is my understanding that the only respectful, non-traumatizing way for someone to reassert their own analytical thinking is for them to make the connections themselves. People are not computers and the indoctrination of any particular mind-control cult will be received in a unique way by a person. In other words, mind control is a bidirectional process, and the co-opting of a person’s sense of self is a really serious disruption to it, along with their entire belief and social system. I have met many people during the more-than-four decades of helping who were still suffering trauma from their deprogramming. While they are grateful to no longer be in the cult, because the group instilled such huge phobias against leaving and programmed members that deprogramming was a horrible ugly violent process, many people, like myself, experienced a “snapping” moment. This snapping moment was even the term used in a 1978 book by Conway and Siegelman as the preferred technique of Ted Patrick, the coiner of the term deprogramming. What I have developed over the years is a three-step phobia intervention, that incrementally educates a person to recognize the difference between a legitimate fear (where is an actual danger) from a phobia (an irrational fear). This method is detailed in Chapter ten of Freedom of Mind: Helping Loved Ones Leave Controlling People, Cults and Beliefs. I have realized that the authentic self still remains and that self is the main ally to the process of exiting a mind-control cult. Working with respect and compassion, as well as, asking good questions and giving very long silences works far better than using content to persuade the person that their beliefs are wrong. Frontal assaults, like this, backfire. The person feels attacked and becomes very defensive trusting less and withdrawing into cult thought-stopping rituals even more.

WHY IS THE TERM DEPROGRAMMING USED BY EVERYBODY?

The issue is that the public and, especially, the media have embraced this term and it generically means “undoing the programming.” It no longer has the negative associations of abduction and forcible detention, like it did when I was involved with it in the mid-1970s. But the bigger issue is that no one, including myself, has been able to come up with a single word that describes “helping a person to wake up from a black/ white and good vs. evil and us vs. them ideology and fervent belief in the leader and or doctrine. So, I call what I do the Strategic Interactive Approach. Three words that do not have the evocative effect of the word deprogramming!  I would love for someone to come up with a better term. Please!

What I wish to start with is what NOT to do. Do not tell them they are stupid. Do not call them brainwashed. Do not speak in a belittling condescending way, and, if a true believer says they feel like you are coming off that way, apologize and ask them how you could have said it so that they would feel respected and understood. In other words, do not try to prove you are right and they are wrong. Do not try to argue the facts and make them agree with you. Do not try to win the argument.

What TO DO is start with respect, kindness, and compassion. if you wish to help a family member or friend, please reestablish contact if it has been broken. Start slowly and set ground rules not to get into arguing politics or anything. Respectful discussions with an exchange of points of view is what you want to pursue. Remember old positive memories, have positive experiences and have fun. Enjoy each other’s company. After rapport and trust are rebuilt, I suggest picking topics like Communist China and their brainwashing programs or Traffickers and how they recruit and abuse people to become their slaves. Then, you can discuss the BITE model and phobias and Information Control. The best technique is to ask questions with a sincere, curious tone, giving the person a long time to think about the answer. Step-by-step. Of course, there is much more, too.