Women in High-Control Groups: Disrespected, Treated as Subservient, Sometimes Abused and Even Raped 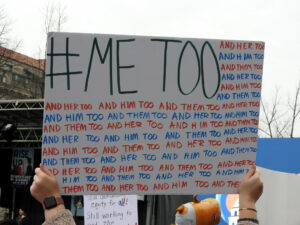 As the U.S. Senate has agreed to hear the testimony of Dr. Christine Blasey Ford about the alleged sexual assault incident that happened years ago with Judge Brett Kavanagh, people’s attentions are back on women’s rights, #WhyIDidn’tReport, and men’s misuse of power and sex. Some Republican members act as if they will confirm Kavanagh as a new member of the Supreme Court no matter what they learn, even with a second and third woman coming forward with accusations of alleged abuse. Twenty-seven years ago, Dr. Anita Hill testified at the Senate confirmation hearing of now Supreme court Justice Clarence Thomas about his sexual harassment and inappropriate behavior towards her. Thomas was confirmed as if his inappropriate behavior did not matter at all. In this #MeToo period of American history, one can only wonder why everyone doesn’t want a thorough FBI investigation, except for the fear that the midterm elections will change the power balance in Washington and a Federalist Society approved judge isn’t added to the Court. So sad that politics seem to be more important than justice and respect for women’s rights.

In this blog, I wish to turn a spotlight on the treatment of women as second-class citizens in some destructive groups. One recent example involves the Jehovah’s Witnesses.  In their December 2018 Study Edition of the Watchtower, they give some dangerous and possibly life-threatening advice to women believers.

Admittedly, there have been instances where an “unbelieving husband” seems to prove that he is not “agreeable to staying with her.” He might be extremely physically abusive, even to the point that she feels that her health or life is in danger. He might refuse to support her and the family or severely endanger her spirituality. In such cases, some Christians have personally decided that, despite what he might say, the mate is not “agreeable to staying” together and that a separation is necessary. But other Christians in comparably difficult situations have not; they have endured and tried to work at improving matters. Why?

In such a separation, the two are still marriage mates. If they lived apart, each one would face challenges, as mentioned earlier. … Many loyal Christians have remained with an unbelieving mate under very trying circumstances. They can testify that doing so was worthwhile in a special sense when their mate became a true worshipper. —Read 1 Corinthians 7:16; 1 Pet. 3:1, 2.” (Bold is mine.)

The result may be deadly for some that stay in such an abusive relationship. This week I had the privilege to video interview  Evelyn De L’Ombre, a former third generation British Jehovah’s Witness and survivor of domestic abuse. In her blog, she explains: “Of course in all of their publications they denounce domestic violence as wrong, but this is always with the caveat that, although women could leave, they should really ask themselves if they should leave.  Or, should they really change their behavior in order to prevent being abused? This is reckless and frankly dangerous.”

What was so interesting is that Evelyn had physically departed the group but was still indoctrinated into their belief system. This included a fear of Armageddon as well as the belief that no matter what your husband did to you, it was up to you to bear it and not complain. She is now working on her recovery and is an activist who wishes to help other women who have been abused.

Women Are Not a Lesser Gender!

Even though we live in the 21st century, many religions still explicitly or implicitly teach that being male is superior to being female. They require women to be submissive and obedient to men. With some high-control groups, sexism is even more pronounced. Females are frequently viewed as subservient, needing to submit to the males of the group or their husband.  Their gender role is often that of wife and mother. Warren Jeff’s FLDS cult exploits young girls and women as baby-making machines for the “prophet” and the elite. Some ultra-Orthodox Jews have excommunicated women from driving cars, going on the internet or wishing to attend university. They, too, are told to obey and follow the man of the household. Some Muslim groups force girls to have surgical mutilation of their clitoris so they cannot have sexual pleasure. Most orthodox religions ban premarital sex and teach that being gay is evil and punishment can be quite extreme. Some abuse of women in destructive cults gets even more extreme due to its closed, authoritarian structure.

Sadly, many women suffer great disrespect, neglect and even abuse and are then blamed for it. If a husband cheats on his wife or is caught viewing pornography, the wife may be chastised by leaders in the cult for not giving her mate his “marital due.” Even worse, some women are actually raped by their husbands and the group turns a blind eye to such attacks. Wife rape is not rare, just rarely discussed. If a woman’s husband refuses to be intimate with her, she has no recourse but to pray and repent. She cannot make him change nor can she divorce, in many cases.

When women are abused, disrespected and treated as the lesser gender, the results can be devasting, not just physically but mentally. Laura, a former leader with her husband in the Bible cult, The Boston Church of Christ, (now called the International Church of Christ) came to work with me in Boston. (By the way, a good support site for ex-members of this group is www.reveal.org.) After a thirteen-year membership in the cult, she exited and was then abused by the mental health system for eleven years because her therapists did not correctly identify the source of her problems. She was in an abusive relationship when a member of the group and after leaving was misdiagnosed by the mental health system. (You can listen to her story in this two-part program that we gave for a course by the renowned psychiatrist Judith Herman, author of the seminal book Trauma and Recovery.  Part 1 is me speaking and part 2 is Laura, blurred to protect her identity.) When Evelyn listened to Laura’s story, she said she really identified with it very much. (If you are a mental health professional, contact our office and we can give you a link to a non-blurred version that Laura allows us to use to train mental health professionals.)

There is a change in our current culture with the #metoo and #churchtoo stories coming to light, along with females standing up for respect, equality, and control of their bodies, even inside religious institutions. We all need to speak up about these issues, demanding change even from within high-control, religious organizations. Men especially need to be heard, as well as, healthy role modeling for children. I strongly recommend the PBS series on the evolution of the women’s rights movement, The Makers. I believe everyone should watch all of the episodes.

This week, I interview Evelyn De L’Ombre, a former Jehovah’s Witness and domestic abuse survivor. Please view the video as we discuss this subject in greater detail.