Yes, There Are Left-Wing Destructive Cults! 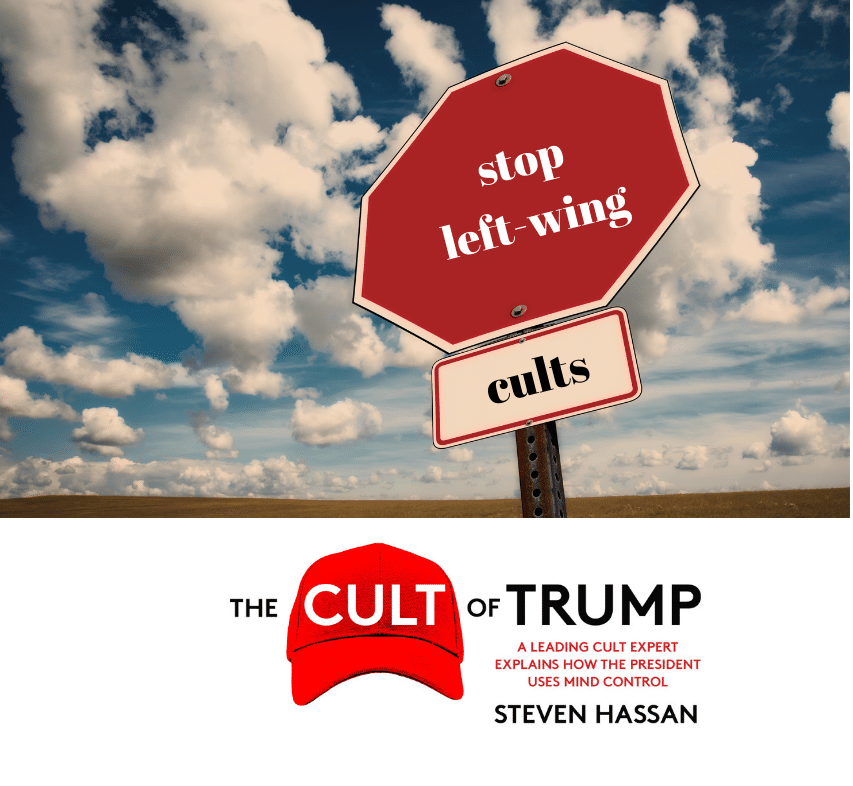 Some people who have recently learned about my book The Cult of Trump are asking the question, “Does Steve believe that there are left-wing cults too?” So, I thought I should answer this question by writing a short blog.

For people who are not familiar with my story, I was actually deprogrammed from the Moon cult in 1976 with the help of Robert Jay Lifton’s seminal book, Thought Reform and the Psychology of Totalism: A Study of “Brainwashing” in China. Dr. Lifton’s famous chapter twenty-two of that 1961 book described 8 criteria that could be used to characterize brainwashing (or as he preferred, thought reform organization). I have written multiple blogs about Dr. Lifton’s work, and I have been fortunate to have videotaped many interviews with him in the past few years. He recently published a new book, the same day as the Cult of Trump came out, entitled Losing Reality: On Cults. Cultism, and the Mindset of Political and Religious Zealotry. In fact, a fundamental basis of my forty-plus years work uses the communist model of undue influence as described by Dr. Lifton, psychologists Margaret Singer and Edgar Schein, and psychiatrist Louis Jolyon West.

I reference the work of experts on cults that have personally been involved in left-wing cults. For example, Dr. Dennis Tourish authored with Tom Wohlforth  On the Edge: Political Cults left and Right and we did a blog and interview.

I did a blog and interview with Dr. Alexandra Stein, who authored Inside Out: A Memoir of Entering and Breaking Out of a Minneapolis Political Cult about her experience in a left-wing cult in the United States.

Sociologist Janja Lalich,who has authored a number of excellent books on the topic of destructive cults, was herself involved with a left-wing cult.

So, I wish to be clear, the reason that I wrote my latest book is because of explicit concerns about Donald Trump. Many colleagues who are ex-cult members and scholars all agree with me that the President of the United States, Donald Trump, has not only fit the stereotypical profile of most major cult leaders (malignant narcissist) but that much of what is taking place in politics smacks of cult mind control tactics. For me, I know the title of my book and the red hat on the cover is provocative. But I agreed to author this book because I believe the problem of cult mind control now pervades world politics and needs to be correctly diagnosed. It is only when there is a correct diagnosis that people will come to have a useful frame to then address and remedy the problem.

For me, as those who have already read the book can attest, my goal is to educate people about exactly what is going on. Then, to offer guidelines f0r how to bring civility and sanity and rule of law back into view and, ultimately, in to practice.

I was recruited into a right-wing cult, the Moonies, and I prayed and fasted for three days on the Capitol steps for Richard Nixon to remain President during his impeachment process because Sun Myung Moon, the man I thought was the Messiah, told me that God wanted Nixon to be President. I was a zealous, true believer, even a leader being groomed to help impose a theocracy on the U.S. government. Moon taught us that democracy was satanic and that “when we took power” the Constitution would be amended. The connections of Moon and the cult group, The Family, (Chapter 7) are established, and Mike Pence, the Vice President of the United States was recruited into the Family by Watergate plumber Chuck Colson and has helped fill Cabinet positions.

All I can ask of anyone is that they read my book and then make their own evaluation. There are 472 citations for my research. I believe the book covers the essentials of what people need to know to understand and take reasonable action to make an ethical change. I am calling for respectful interaction between people critical of Trump and supporters of Trump. Listening to each other and having intelligent interaction. No name-calling. The goal is not to win an argument but to promote perspectives, find common values and common ground and remember we are all Americans. Think about our children and our grandchildren and future generations. Democracy requires educated citizens who participate. Everyone needs to register to vote. Everyone should support the Constitution and rule of law and due process.