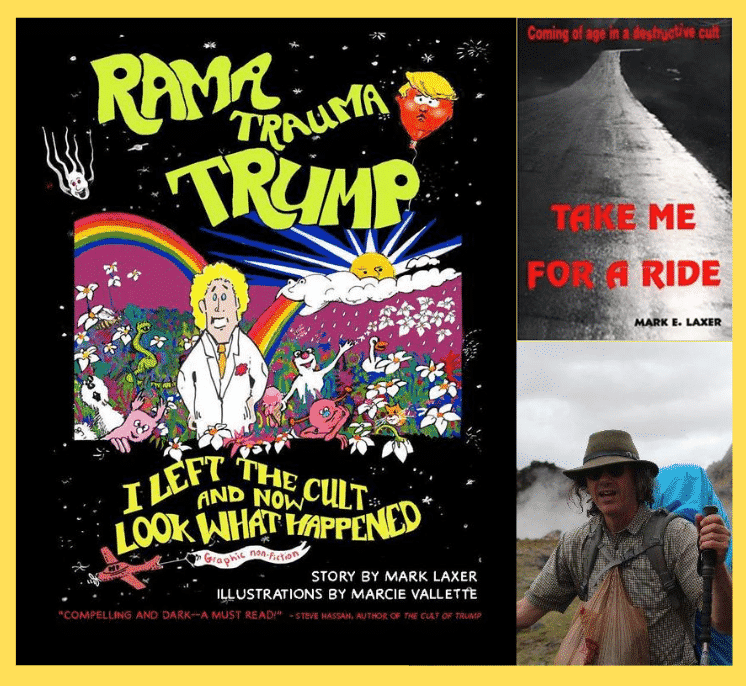 I am happy to share a new, free, graphic nonfiction book entitled, “Rama Trauma Trump” written by my friend and former cult member Mark Laxer. It is based upon his earlier book, Take Me for a Ride: Coming of Age in a Destructive Cult which is the true story of Mark, who, at the age of seventeen, longed to see for himself what lies beneath the surface world of reason. Mark’s spiritual path took an unexpected turn when his meditation teacher, Frederick Lenz, learns to use fear, sleep deprivation, and LSD as tools of persuasion. After leaving Lenz’s inner circle, Mark faces headwinds and haunting memories as he bicycles across America. More than a vehicle for exercising and exorcising subtle ghosts of the past, the bike trip serves as the frame through which this combined adventure story, self-help book, and expose is narrated.

‘Rama Trauma Trump’ is the true story of a seventeen-year-old who joins a spiritual group that starts out cool but gradually, over years, turns abusive. The young man leaves the group, tries to come to terms with the past, and years later is surprised to find that the larger culture looks an awful lot like the cult he had left. Ultimately, Rama Trauma Trump is the story of friendship and loyalty which transcends the mind-bending power of charismatic leaders. Mark wanted to share his story to help educate young people especially about Trump and other cult leaders.

Zen Master Rama, aka Atmananda, aka Frederick Lenz, was a supposed computer guru, and “American Buddhism” cult leader who was very abusive. He changed his name a few times. He pulled a few PR stunts. He was a college professor and a former cult devotee of cult leader Sri Chinmoy. Lenz left and started his own cult. He claimed to be an Enlightened Master from the continent of Atlantis. He taught meditation which to me was very hypnotic. He was had sex with several female disciples. He sometimes took LSD with his followers who paid him thousands of dollars to be his student. He promised to protect them from evil, dark forces.  Members had to cut off from their family and friends and went into computer programming to keep up with his ever-increasing fees. Lenz took credit for music from a follower that was a professional musician. Yet, it was after Dateline exposed him that he killed himself, his dogs, and seemed to want to take his girlfriend along with him. He died in 1998 at the age of 48. Unfortunately, a number of his disciples, instead of returning to their lives went on to cult leader Franklin Jones, aka Adi Da, who resides on a Fijian island donated to his cult.

Lenz was very charismatic. His followers believed he had special powers. The Washington Post released a detailed article about him. (Read the entire article here.)

Students were taught that meditating up to three hours a day was the path to achieving success and power in the computer field; and it was Rama who would empower them. If they meditated well, they would make more money. Naturally, some of this money should go to Rama, who charged little for beginners, but accelerated the fees as the students secured lucrative computing contracts. Over time, the dropouts say, Rama would equate one’s spiritual progress with one’s earnings.

He also used demonstrations of his “powers” — followers swore he changed shape, altered the patterns of stars, shot beams of light — as a way to instill awe and to control them. Ex-students say he even dictated what shampoos they should use; Nexxus and Paul Mitchell were best, “high-energy.” They say they learned the doctrine of “inaccessibility” — using answering services and mail drops to avoid contact with relatives and friends.

When you look at the BITE model, it is very clear that Rama was using undue influence for power, money, and sex. Speaking with former members like Mark, their experience was one of submission and control. Control of their behavior, information, thoughts, and emotions.

Yet, Rama was the guru. He was dangerous. And his disciples were committed true believers, even when lies were told repeatedly. Like other cult leaders, Lenz used projection to deflect attention from his own unethical actions. The signs were right in front of them. Today, we have a similar issue with Donald Trump. He, too, has a malignant narcissistic personality like Fred Lenz. Trump has his cult following who believes he is great and some even believe he is working for God. Young people, especially, need to learn about cults and mind control so as to better understand the dangers and avoid the pitfalls. Rama Trauma Trump was written for everyone to read, but especially for younger people. Also, they should read The Cult of Trump and Combating Cult Mind Control.

Rama Trauma Trump is a collaboration between two Vermonters, artist Marcie Vallette and Mark Laxer. They are sharing Rama Trauma Trump as a free digital download because they believe bad things happen when good people do nothing. They feel the nation is in danger. “Please download and share the book,” they ask. “And above all, please vote.”

Additionally, Mark recently wrote an OpEd concerning how the current administration is not using the tools to catch money launderers and criminals. Why? Read it here.

In addition, I interviewed Mark and we discussed Zen Master Rama and how Donald Trump fits the characteristics of a cult leader, Mark’s new graphic novel, and Donald Trump. Please watch our video, below. Download and share ‘Rama Trauma Trump’ and don’t forget to register, and don’t forget to vote! Not just for the Presidential election but for all local elections too. Do not let powerful outsiders influence local government. 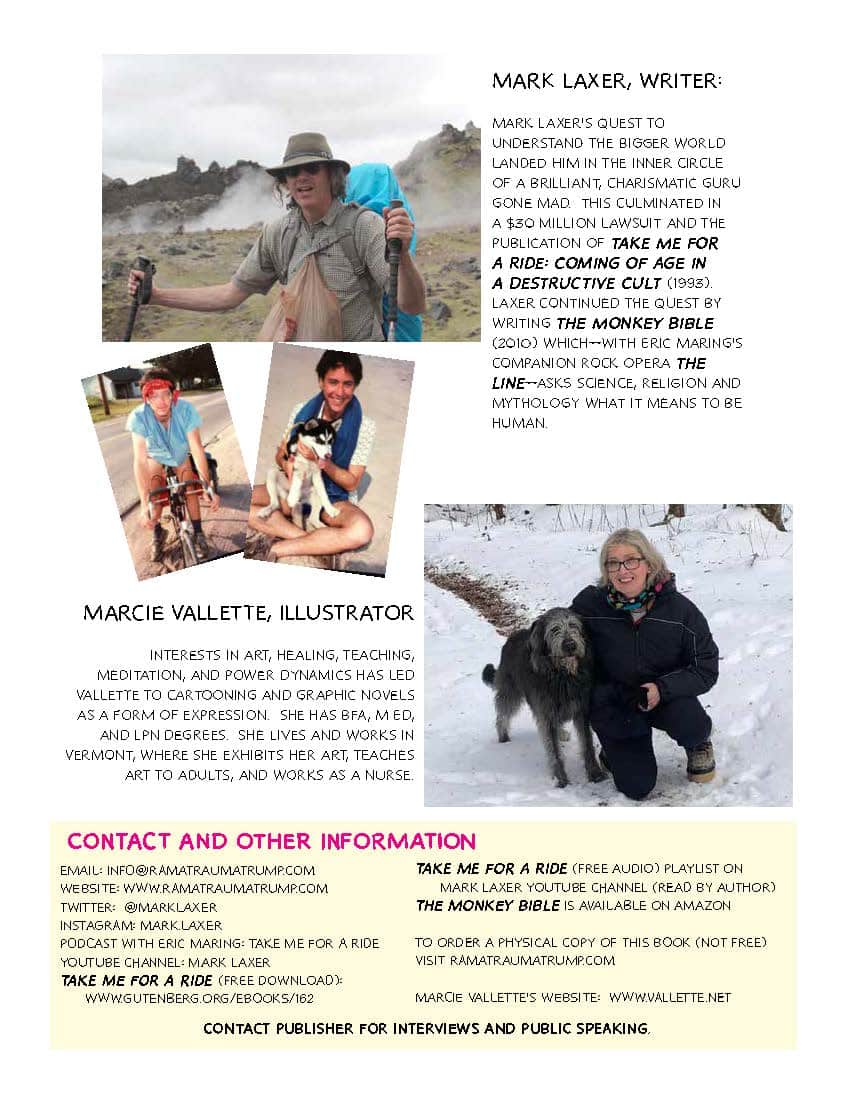 Learn About the BITE Model