Violent extremism is a form of undue influence.  Terrorists and hate groups use deception, manipulation, isolation from friends/family, and “love bombing” to recruit.  They encourage absolutist, black-and-white thinking.  In addition to the practices listed in the BITE Model, they use threats of harm to members and their families to keep them obedient and loyal.  Groups like ISIL/Daesh may even confiscate passports and other documents required to move about freely. In the United States, Neo-nazi and white power groups commit more acts of terrorism that extremist Islamist groups.

According to the FBI’s Countering Violent Extremism program, violent extremism is “encouraging, condoning, justifying, or supporting the commission of a violent act to achieve political, ideological, religious, social, or economic goals.”  While this broad definition includes groups motivated by a variety of ideologies (for example white supremacy, anti-abortion, nationalism), the terms “violent extremism” and “terrorism” most often refer to extreme Islamist groups such as Hezbollah or ISIL/Daesh.

What’s missing from many approaches to fighting violent extremism is a fundamental understanding of undue influence and the techniques of hypnosis and other tactics used by these groups.  Understanding undue influence should inform public inoculation efforts, ethical interventions, and recovery for ex-members of these groups. I wrote this blog after the shooting at the Pennsylvania synagogue in 2018. I wrote this blog about former white supremacist leader Arno Michaelis and his efforts to de-radicalize believers. Here is an interview I did with Caleb Cain (FaradaySpeaks channel on YouTube) who was featured in the New York Times as having been radicalized online.

How can someone be radicalized?

When a person is under undue influence,
they are surrounded inside a bubble with many influences. 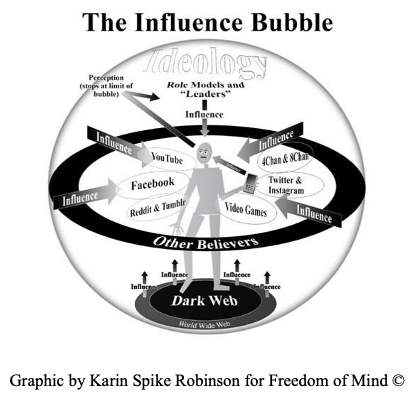 People can be situationally vulnerable and deceptively recruited and indoctrinated into violent extremist groups, just like any other cult. It is notable that much of this recruitment is now taking place over the internet with recruitment videos, social media posts, and chatting instead of in person.

Cults often have “front groups” which they use to recruit people who have negative feelings about the main organization. Similarly, groups that engage in violent extremism use front groups to locate individuals who might be persuaded to join their cause. They target people who “like” certain posts on social media, build up rapport, then invite them to chat in encrypted message boards and private chat programs. These posts that are “liked” are designed to appear innocuous or sympathetic.

After the initial “hook,” recruiters use a pattern of commitment drawing people deeper into the group. They start by asking for small favors, like sharing a video or blog post. As time goes on, they ask for more and more involvement. They never lead by asking a person to commit violence against themselves or others.

Recruiters will also use social media to mine information about potential group members. They can later claim that they saw a certain image while praying or meditating, and pretend to have been inspired. This is the same tactic that “psychic” scam artists often use to appear to have supernatural abilities. Recruiters can also use the information on young people’s social media profiles to make them feel guilty. People are manipulated into believing that the only way they can be redeemed is by joining or becoming a more zealous member of the group. This is eerily similar to the tactics used by Bible cults: “You are a sinner, and the only way to be saved is to attend our group and give us your time, money, and devotion.”

Time spent watching videos and chatting with recruiters serves to further isolate young people from friends and family, and decreases the time they have to seek out healthy relationships. Recruiters are skilled at building up rapport and making young people feel like they are joining a larger community, united by one righteous cause. They will even pose as new or potential members of the group in message boards and encourage people to conform to the ideals of the group. They will coordinate efforts to make a potential recruit feel like they have stumbled onto a new group of friends who will love and accept them. This technique is called “swarming” or “love bombing.” This friendship is often contrived, insincere, and only in effect for as long as it takes to convert an individual into a zealous member of the group.

What can families and communities do?

Families and communities need to be able to inoculate young people against violent extremists and other cults. They are in the best position to teach children to beware of anyone asking them to communicate in secret, attempting to instill phobias, or asking them leading questions with loaded language. Families need to note radical changes in behavior and increased patterns of isolation.

Since violent extremist groups teach absolutist, black-and-white, Us vs. Them thinking, it is important to counter that by teaching the value of empathy, diversity, nuance, and cooperation.

If someone suspects that their loved one might be involved in violent extremism, it is extremely important for them to keep lines of communication open. Issuing ultimatums or using words like “cult” or “terrorist” can cause thought-stopping behaviors and other defensive reactions. Individuals need to know that their friends and family love them unconditionally.

It is normal to want to try to “wake up” a loved one by presenting them with a long list of arguments or counter-evidence against a group. However, asking thought-provoking questions in a curious-but-concerned manner and giving plenty of time to process, think, and answer is more effective than trying to debate rationally or argue through the Qu’ran. Ultimately, love is stronger than mind control.

How can I learn more?

Read Combating Cult Mind Control to learn more about how groups use undue influence tactics to recruit and maintain control over their members.  You can also watch the Violent Extremism playlist on our YouTube channel.  Contact us if you are interested in having Steven Hassan train the people in your organization on how to spot undue influence, how to inoculate the public against recruitment into violent extremist groups, how to ethically intervene, and how to help ex-members of violent extremist groups recover.

To learn more read Combating Cult Mind Control  which explores cult psychology, curing the mind control virus, how to protect people you care about and strategies for recovery.

Contact us to inquire about setting up a training workshop for your organization.

If you’d like to read more about violent extremism, consider these books:

Destructive and Terrorist Cults: A New Kind of Slavery

ISIS: The State of Terror