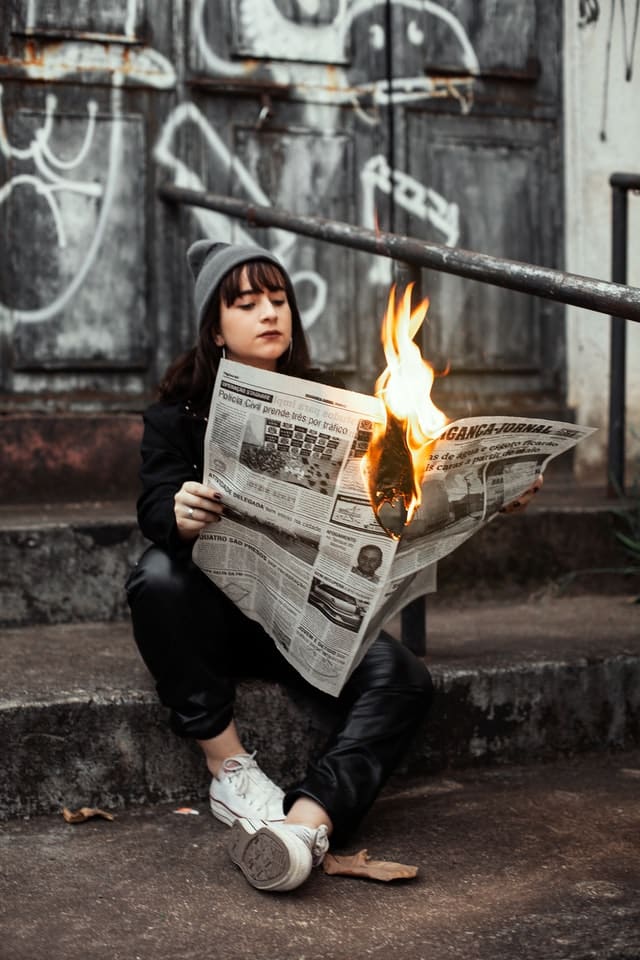 Reporters covering QAnon for the past few years have over time inadvertently done more harm than good. In fact, they probably have done great damage. By amplifying the conspiracy to the level that it is now squarely in mainstream discourse is problematic. The way it is discussed and covered as something edgy and transgressive has done little to slow its spread.

The group’s adherents have been subject to ridicule, mockery and its most mindfu*ked made into laughingstocks, driving QAnon followers into the comfort of their collective in-group. Meanwhile, reporters chasing the great mystery of “who is Q?” instead of asking, “what is Q?” have only helped enhance the core myth of this particularly neo-fascist death cult. As with cults and terrorist groups, there are individuals that sit at the top of the pyramid but around and beneath them, there is a network. Please watch the TEDxMidAtlantic special with David Troy, Jim Stewartson, Desiree Kane and myself for a unique deep dive to understand- “Dismantling QAnon,” (October 22, 2020).

The overall amplification of the big lie conspiracy cult has pushed the situation and the dangers facing our country to the edge. Worse, much of the coverage has, as of late, taken on the air of fake irony, a transgressive cool which is to treat the group’s insidious phobia indoctrination around Satanic pedophiles and anti-Semitism as a joke. This is an echo of the pre-Nazi takeover of Germany. This is how such disturbing beliefs became incrementally normalized.

To marginalize these ideas, there must be a clear social cost for harboring them. Those who hide behind online aliases must be identified and result in real life legal and financial repercussions. Unfortunately, some media personalities who have been covering QAnon have gained a degree of internet fame and rather than focus on helping people and educating the public, media coverage has ensured that the opposite has taken place. A small cadre of reporters on this beat has not helped people to exit from malignant groups but rather have ridiculed them instead. The end result is people are pushed further into a detrimental silo of beliefs that causes them and their loved ones harm.

For example, a troubled young man in Chandler, Arizona named Austin Steinbart was effectively brainwashed by the mind control cult behind this psyop into believing he was the fictitious figure known as “Q.” The media, especially Will Sommer in The Daily Beast christened him “Baby Q” in a cheap effort at clickbait. As federal charges came and Steinbart dropped his attorney to go pro se with his defense, Sommer reacted by mocking him on social media (“what could go wrong?”) despite the rather obvious human tragedy.

Similarly, a young actor named Isaac Kappy was likewise driven to suicide, leaving behind a note that alluded to Q. In both cases, the cultic undue influence of these individuals was laughed off, treated more as comedy than tragedy. In covering something as seemingly inhumane as a neo-fascist death cult, we must be careful not to lose our humanity ourselves.

Sadly, the coverage on the popular QAnon Anonymous podcast has increasingly begun to resemble controlled opposition. In a recent episode dragging into nearly two hours in length, the trio behind the podcast gave tremendous time to amplifying the voices of some of QAnon’s most prominent voices, including Jim Watkins who runs the message board 8kun, just after some in the QAnon media ecosystem had been deplatformed by Twitter and YouTube. The podcast hosts further indulged these individuals by using their online aliases, thereby granting them protection from consequences in their real lives, permitting the online live action role playing (LARP) to continue along with their world of unreality.

One of the QAnon Anonymous podcasters, Julian Feeld, crossed every conceivable journalistic line in showing up in a Hawaiian shirt which has become popular with the anti-government Boogaloo movement. Further, he posted a selfie with Watkins. He praised Watkins during an open mic at the end of a panel discussion by thanking him for all he has allegedly done for free speech and asking, “Is Q cool?”

Who exactly does this serve? If taking the time to learn about cult mind control, recruitment, modern terrorism and deradicalization is too much to ask for those covering the big lie conspiracy cult QAnon, I propose some ground rules:

2. Acknowledge that you too believe crazy things and have believed things that turned out to be false.

3. Pull people in not by ridiculing those who have bought the total indoctrination but by explaining cult mind control (Behavior, Information, Thought And Emotional Control) which involves a process of unfreezing the mind, indoctrinating an individual and then refreezing their identities.

4.Understand that behavior, information, thought and emotional control is how destructive groups hold sway over individuals and how the radicalization process occurs.

5. Be empathic in your coverage. A lot of people have lost family and loved ones to the grip of destructive mind control cults, not just QAnon.

6. Emphasize that the group’s adherents are also victims and that victims can also be perpetrators.

7. Circle back to sex trafficking and remind followers that pimps are incapable of love but all they talk about is love. QAnon talks a lot about human trafficking but the fact is these networks are broken up not by extrajudicial justice but by active NGOs such as Polaris Project, Truckers Against Trafficking and the Voices and Faces Project, as well as law enforcement, the Department of Justice and various State’s Attorneys General. Ultimately survivors and ex-members who reach out to help others are the most effective force to deradicalize others by sharing their own stories. We are starting a hashtag movement of #iGotOut and we hope there will be many who will exit QAnon soon.

8. Encourage people to stay connected to those in their lives who are falling down the rabbit hole of conspiracy theories and networks online, especially those in the earliest stages.

9. DO NOT AMPLIFY THE VOICES OF DISINFORMATION AGENTS. Social media companies are actively deplatforming them in an effort to push their vile agenda which threatens public health, safety and security to the margins.

10. KNOW THAT THIS ENDS WITH EXPOSURE AND TRUTH and that cults do end, people lose interest and the greatest way to expedite the end of this group is by highlighting the corruption, deviance and manipulations of the group’s leadership.

A final comment. Reporters repeatedly reflexively seek to answer the question “who is Q?” There is no “Q” and QAnon is run by a network of people. Just as we were fooled into thinking Guccifer 2.0 was a “Romanian hacker,” we are being fooled into thinking “Q” is some single individual. This is a simple misdirection; a magic trick, and poses the biggest barrier to accurate reporting and understanding of a complex psychological operation. We should acknowledge this fact in any coverage. Lastly, a hashtag movement, #iGotOut, of former cult members and controlling relationships is getting started to hopefully create a wide exit ramp for disillusioned QAnon believers. Website is https://www.igotout.org/

QAnon and the BITE model of Authoritarian Control.

NBC News, Trump’s QAnon followers are a dangerous cult: How to save someone who has been brainwashed. (September 11th, 2020 by Steven Hassan)