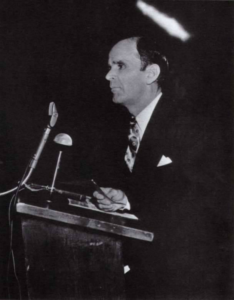 Millions of Americans are members of Message churches today. The Message cult — a collection of sub-groups that originated from William Branham’s Pentecostal Tabernacle — is characterized by its extreme white supremacy and deeply misogynistic attitudes.

Claiming to be a prophet who channeled messages directly from God, Branham formed the Billie Branham Pentecostal Tabernacle in 1936. Branham recorded approximately 1,500 sermons, starting before 1947 until his death in 1965. Today, many sub-groups exist, and they use these recordings as a means of keeping the Message alive.

My friend and colleague, John Collins, was born into Branham’s Message cult. Since escaping, he has worked tirelessly to understand the cult’s true history and free himself from the trauma he suffered from growing up in the cult. In his book, Preacher Behind the White Hoods: A Critical Examination of William Branham and His Message, Collins uncovers myth after myth to reveal the outrageous truth about Branham’s shady life and the racist history of the Message churches.

Growing up in the cult, Collins was aware of the violent physical abuse and was indoctrinated into a racist and misogynistic worldview.

Women in the cult lived under very strict social guidelines. Women who wore pants were considered harlots. Branham said that letting women vote would lead to the “destruction of the United States.” Women were strongly discouraged from working or going to school. Branham endorsed an animal kingdom hierarchy, saying that human males were the highest, but women were even lower than hogs.

Branham’s sermons lay the foundation to believe that black people are the inferior race. In one of his most famous sermons, he taught that the biblical serpent had sexual relations with Eve, which resulted in two bloodlines, one good and one bad.  Along with this doctrine, Branham taught that the “black race” should not breed with the “white race” or it would produce a “hybrid”.  This was a theme used by white supremacy groups. (The ‘white’ race being good and the ‘black’ race being evil).  Branham spoke against education generally, but he especially disapproved of the education of blacks and the integration of blacks and whites in the public school system. Black people had “no business” for reading, writing, or arithmetic, he insisted. Branham also regularly condemned civil rights advocates like Martin Luther King and John F Kennedy. He even went so far as to claim that Kennedy was the antichrist. Throughout his entire ministry, Branham kept close connections to Ku Klux Klan (KKK) members and supporters including E. Howard Cadle and Clem Davies.

The Message cult has always been deeply connected to white supremacy groups. Branham’s first pastor and life-long mentor — Roy E. Davis — was a convicted bank fraudster and a notorious womanizer. More shockingly still, Davis was the official spokesman of the KKK and claimed to have written their constitution. In later years, Davis was the first Imperial Wizard of the KKK to unmask himself in public.

Davis was involved with the beginning of Branham’s Message movement. Davis took over part of an established church in Jefferson, Indiana. In 1936, when Davis was eventually extradited to Arkansas on charges of grand theft auto and suspicion of murder, Branham took over his church, forming Tabernacle.

Looking at the Message Cult Using the BITE Model

Like all authoritarian cults, the Message cult uses mind control and undue influence tactics to recruit and control members. I developed the BITE model and Influence Continuum to help identify and describe the ways that cults recruit and maintain power over people. In his book, Collins uses my BITE model of authoritarian control to help us understand the destructive ways that the Message cult controls the behaviors, information, thoughts, and emotions of its members:

Members of the Message cult are encouraged or forced to isolate themselves from non-believers. Many sects regulate sexual intercourse, including by forbidding birth control or forcing intercourse. The churches enforce the Pentecostal dress code and discourage or forbid modern fashion. They forbid certain types of food and drink, as well. In extreme sects, sleep deprivation is forced on members.

The Message cult uses deceptive tactics to recruit and indoctrinate unsuspecting people. Cult recruiters do not tell new members that the cult originated with deep ties to white supremacy groups. In fact, cult leaders deliberately and systematically lie to members claiming otherwise, and they either dissuade or forbid members from accessing the critical information that would disprove their claims. Cult leaders usually forbid members from speaking with former members. And depending upon the sub-group, members are often forbidden from accessing television, radio, books, newspapers, magazines, and the internet.

Members of the Message cult are required to believe that Branham is a prophet, and are required to ascribe ultimate and absolute authority to doctrine and scripture. Any thoughts that criticize the cult, its leader, or its doctrine are prohibited. Cult leaders tell members to practice thought-stopping techniques including singing, meditating, or praying when non-cult-approved thoughts enter their minds.

Cult leaders emotionally manipulate members by encouraging feelings of guilt and sorrow suppressing feelings of anger or doubt. Once recruited, members are taught to fear leaving. They are told that if they leave, they will be shunned, ridiculed, and will face tragedy and eternal damnation.

The Significance of Message Churches for Politics Today

Despite his racist ideas and ties to white supremacy groups, to this day, Branham is revered by many within the Pentecostal and charismatic world. The Message churches have a significant following and an enormous potential to influence people and create violence.

In light of the Black Lives Matter movement and the fight for racial justice in this country, it is important to think about the ways in which authoritarian mind control is being used to instill and maintain racist ideas in so many people.

By shedding light on the racist history and harmful practices of the Message churches, Collins helps us better comprehend the problems that face our country. Understanding the tactics that authoritarian cults use to deceive and control is necessary to counteract them.