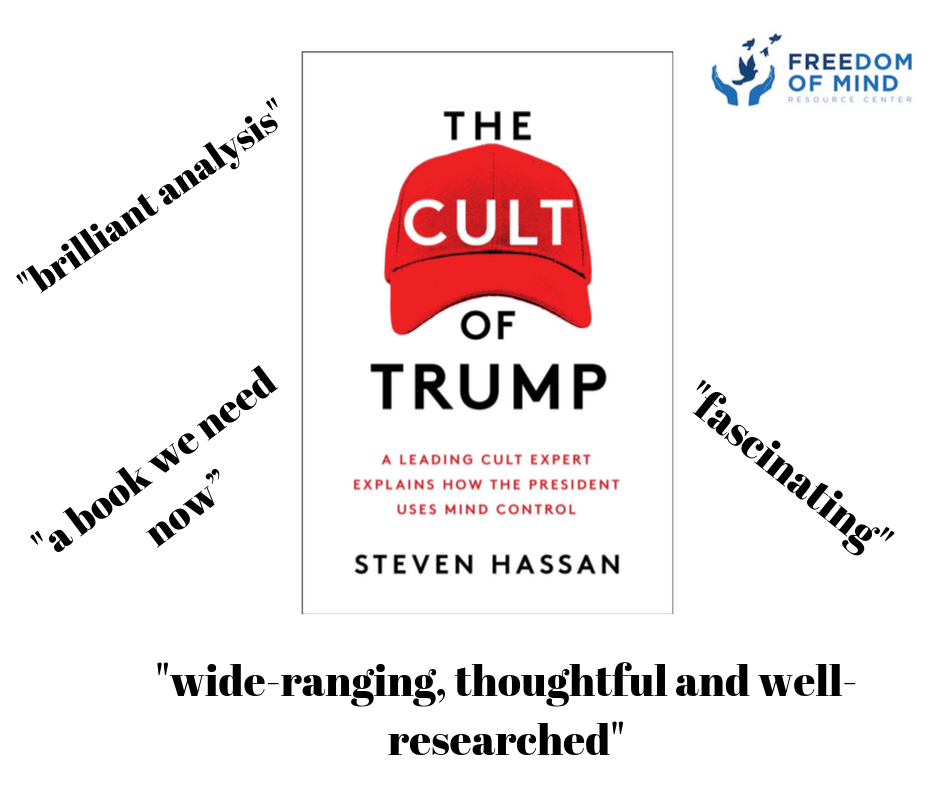 The Cult of Trump: A Leading Expert Explains How The President Uses Mind Control

In August, I announced the publication of my new book with Simon and Schuster! The book will be available next Wednesday, October 15, 2019, but of course, many people have pre-ordered it. It is available as an audiobook, too and is being sold at Amazon, Barnes and Noble, and other major booksellers including Target. To learn more, please visit my page on The Cult of Trump, pre-order your copy (links below) and learn about the interviews I have done. Also, sign up to follow my social media if you wish to learn about forthcoming media and appearances. If you have not yet subscribed to our once-a-week email list, you are invited to do so with the link below.

The Cult of Trump is an accessible and in-depth analysis of the president, showing that under the right circumstances, even sane, rational, well-adjusted people can be persuaded to believe the most outrageous ideas. Hassan’s book is essential reading for anyone wanting to understand the Trump phenomenon and looking for a way forward.

“A psychological portrait of the sitting president, whom the author considers a master of mind control.

Having been a longtime member of Sun Myung Moon’s Unification Church and now an apostate, Hassan […] is an authority on breaking away from cults. That there is a “cult of Trump” is something he takes as given; … going on to examine the techniques of gaslighting and outright lying that Trump has employed from the very beginning, […] Even if one does not accept that Trump is a cult leader as such—all politicians, after all, have their core of true believers—Hassan makes it clear that he is a master of certain rhetorical devices that do not require much intelligence but speak to much practice: the repetition of words and phrases, […]

Hassan also counsels that challenging a cult member about the veracity of his or her object of veneration is bound to produce only a defensive reaction; in its place, he offers a diet that includes a good dose of healthy skepticism about what we read and hear. The author’s dark likening of Trump’s followers to those who drank poison at Jonestown is, let us hope, hyperbolic.

An argument that, though seemingly from the fringe, bears consideration as the next election cycle heats up.”

Advance Praise for The Cult of Trump

Cambridge On My Mind Column: The cult of the president, by Steve Nadis, October 3, 2019: “We […] discussed Hassan’s new book — a terrific, provocative and harrowing read.”

What Trump Has in Common With Cult Leaders, by Cody Delistraty, October 8, 2019: “Steven Hassan knows a thing or two about cults—he’s a former Moonie. His new book explores how Trump’s ideology mirrors indoctrination.”

“After being the victim of a cult, Steven Hassan has dedicated his impressive career to understanding the dynamics of cults and mind control.  In this book, he applies the principles he has developed with clarity and in a neutral way.   Every American will benefit from understanding the hallmarks of mind control in this tumultuous and divisive era. The Cult of Trump is a book we need now.”

“Drawing on both his experiences as cult expert and ex-cult member, Hassan opens a wide-ranging, thoughtful and well-researched analysis of some of the most puzzling aspects of the current presidency, including the remarkable passivity of fellow Republicans, the gross pandering of many members of the press, the curious avoidance of clear labels that could and should be applied  by the media. Quibbles and speculations about diagnosis do not play central roles. Instead, the current administration is best understood through cult analogies, including factors such as total authoritarianism and intolerance of any questioning or deviation from the “playbook.” This is both a clarifying and a terrifying book. Highly recommended.”

“This book is a fascinating tour through the ways people are recruited and retained by cults, the characteristics of cult leadership and the dimensions of undue influence. Point by point, Hassan shows how Trump and his followers meet each of the criteria that define a cult and how Trump’s childhood and rise to the presidency shaped his imperious, narcissistic style and why his followers, both in the voting public and the congress, cannot make a rational evaluation of his words and actions. This book is a must for anyone who wants to understand the current political climate.”

“The Cult of Trump, in step-by-step detail, examines the inner-workings of our current Presidential administration.  Hassan masterfully parallels the psychological manipulation employed by cults over its members with the current administration’s distortion of reality by its twisting narratives and use of systematic techniques to influence our view of the country. The picture is much darker than mere buffoonery.”

“Amidst the welter of commentary, analysis and angst concerning the phenomenon of Donald Trump and the national malaise of which Trump is a symptom, Steven Hassan provides an important and unique perspective. Carefully describing the elements of mind control as used in groups commonly referred to as cults, Hassan demonstrates how Trump’s appeal to his loyal core of supporters and his unlikely rise to President have been facilitated by techniques of undue influence that have been honed by extremist groups and authoritarian leaders over the decades.  Hassan also reveals how our cognitive biases make all of us vulnerable to Trump’s messages of danger, decline and conspiracy. While the spectacle of Trumpism continues to unfold with new outrages every day, Hassan also offers a way forward, with calm, practical advice on how to speak with Trump supporters, overcoming the divisiveness and mutual suspicion that have hamstrung our democratic institutions.  In particular, he explains how our natural inclination to directly contradict Trump’s lies and fallacies to his supporters is likely to be counter-productive. Based on his long experience in helping victims of cults and their families, Hassan shows how a more conciliatory and cooperative approach will yield better results. Hassan’s book is essential reading for anyone who is seeking to understand the Trump phenomenon and to find a way out of the morass.”

Here is a list of previous blogs that include interviews I conducted as part of my research for this book.